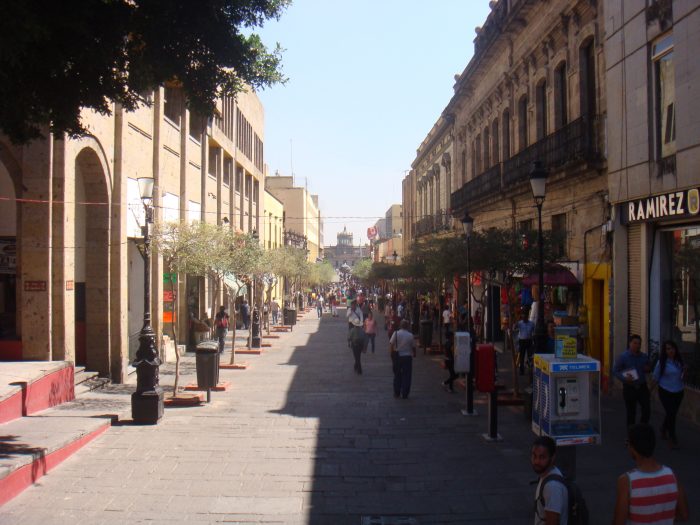 6.30am. I wander outside the club to realise that I’ve left the map to the hostel back in my room. Fuck! I have no idea where I am, and all I know is the name of the hostel: Hostel Tequila (quite apt at this time). How am I going to get back? I’m not particularly drunk, and for some reason, perhaps due to the relaxed nature of Mexico, the predicament appears more humours then worrying.

I’d earlier been in a bar with some hostel friends, when a man of homosexual preference approached me and said that this friend would like to dance with me, but she (note: a woman) was very shy. I agreed in my broken Spanish and we danced semi-awkwardly (latin dance skills aren’t top of my CV), while the hostel and her friends watched on in amusement.

An hour later, her and 5 of  her friends are packed in to a car and heading for some sort of after party. Mr Homosexuales has some basic English, but other then that I’m completely on my own, listening in to the conversation and trying to pick up the odd word in order to work out what is going on. I don’t hear anything about muerte or el kidnappio, so all appears well.

We enter the club/ravey place (playing some serious doof doof music) and dance away until I look down at my watch and realise its 6.30am and I should really be heading back. Comical exchanges take place, as I try to explain to Mexican friend that I have lost my map, and don’t know how to get home, or even whereabouts the hostel is, just the name – Hostel Tequila.

She departs for home and I make my way over to a Taxi stand, where I find a Mexican looking fellow who speaks no Ingles. I try my best to explain my situation, that I am lost and that I only know the name of the hostel, but in a city of 5 million it is most probably wishful thinking, and he has no idea where it is. I think he must take pity on me and is also finding the whole thing quite humours (as am I), as he phones a friend and is able to get some rough directions and we depart on our way.

Despite the language barrier we manage to share a few jokes on the way back, mainly him laughing at the predicament id got myself in to, but also about the state of the English national football team. I definitely got my 70 peso money’s worth for the cab, as we drove round and round trying to find the hostel, but eventually we found it as the sun was coming up, and I promptly fell asleep on my bed.

The city isn’t particularly picturesque, in fact there isn’t really that much to see from a tourist point of view, especially for a city this size. There are something so endearing about it to me, the people are so friendly, the hostel is one of the best I’ve ever stayed complete with swimming pool, free breakfast, spacious and clean rooms, and a great team of Mexican staff.

The first night I arrived, there were a group of Mexicans down from another city for the weekend, playing guitars and singing along. I start with what has become my usual opening sentence: ‘Mi Llamo James, Soy Ingles. Lo siento, mi espanol es mal’, I’ve probably written down incorrectly but it works well enough when spoken. Translated as: my name is James, I am English and my Spanish is bad. From that I then attempt to make some conversation, which although sometimes is understood, is pretty awful Spanish at best.

Before I know it they are welcoming me in to the group, with the warmth, friendliness and slight craziness that has been archetypical of my Mexican experience so far. After a while a large group forms in the Hostel, including another English guy. The Mexicans thrust the guitar at us and refuse to give in until we sing or play something English. I agree to play as long as the other guy sings, so I launch in to the guitar novices’ go-to song that is Wonderwall. The English guy starts signing and after the first few chords the whole hostel is howling along, and it just felt like one of those moments.

After that I got talking to another Mexican, Josh, who I have become good friends with. He invited me over to a house party that was going on that evening. It was an intriguing night, ending up in a strange bar which looked like a converted house, playing a bizarrely eclectic mix of songs, something akin to putting your dads iPod on shuffle, with a bit of Latin music thrown in for good measure.

The bar must have been too loud, or playing too late but all of the sudden the music went dead, leaving everyone in a bit of confusion. A few minutes later the Police were inside, and everyone was kicked out. A perfect time for Josh to ask the Police where the nearest Taco stall was, which amused me greatly.

The following night also involved the Police, though this time it was catching a French guy drinking beer in the street. The Police lined us all up, though doing so in a very friendly way, and a strange act played out which involved giving us all a firm dressing down, before shepherding the only Mexican of our group to their car. It later transpired that the Police were blaming the Mexican as he knows the laws, and a fine slash bribe was needed in order to make the problem go away.

The Mexican paid the $500 Pesos which the Police asked for, but he refused to accept any of our money which we tried to give to him after. Myself, the French guy and another slipped some money in to his pocket to try to make up the difference, but it was clear that he was sad that we had to witness the spectacle. Despite the two brushes with the Police, I haven’t felt unsafe in the slightest, even when they were talking to us about the drinking in the street, and was actually far more on edge in Los Angeles.

After the fine, the Police came and shook all of our hands like long last friends, and even shared a joke with some of the better Spanish speakers. It seemed that the good and bad of Mexico had just been encapsulated in that scene.

When I arrived in Guadalajara, I had booked 5 days. ‘You’ll stay longer’ most of the people told me. Strange, I thought, as there didn’t seem to be that much to do in a tourist sense. There are some picturesque cathedrals and colonial buildings, but the place just has a warmth to it which seems to emanate itself through the locals, who have been smiling and friendly to deal with so far.

The first couple of days I didn’t really have much confidence to attempt Spanish, but now in my 6th day or so, I am finding it great fun to give it a go, which usually gives the locals a laugh, or leaves them completely baffled – or often both. The food has been amazing, as I had kind of expected, but I’ve been lucky enough to fall in to a good crowd at the Hostel.

One guy from the hostel is seeing a local Mexican girl, so I have been fortunate enough to spend some time with her and her friends to practice my Spanish, and they’ve also driven us around and shown us some popular local night spots away from the tourists (though there isn’t a great deal in the first place, which is nice). The friendliness that her and her friends have showed me has been really been quite humbling, and they are a lot of fun to hang out with.

The last week has flashed by in a Tequila and Taco blur, and as I mention to my hostel friends that I am thinking of staying longer in Guadalajara, none of them seem surprised – they laugh at me like they knew I would all along.

Some fun and rowdy Mexicans from up north!

Business card on a night out 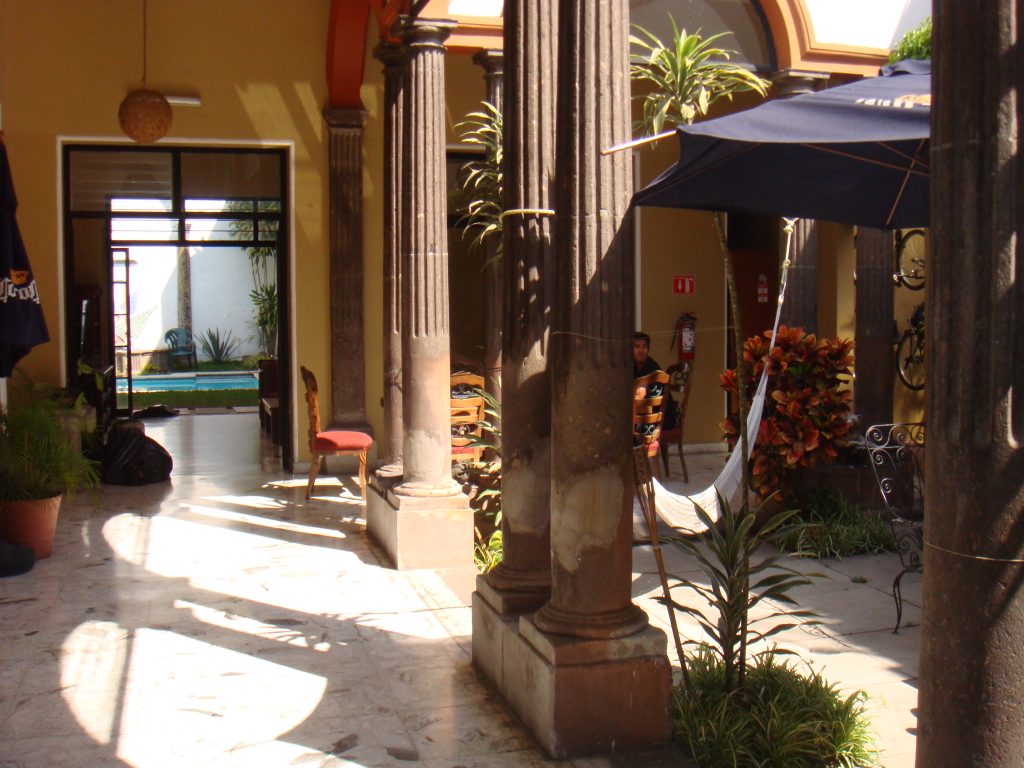 The Tequila Hostel, complete with hammocks and swimming pool 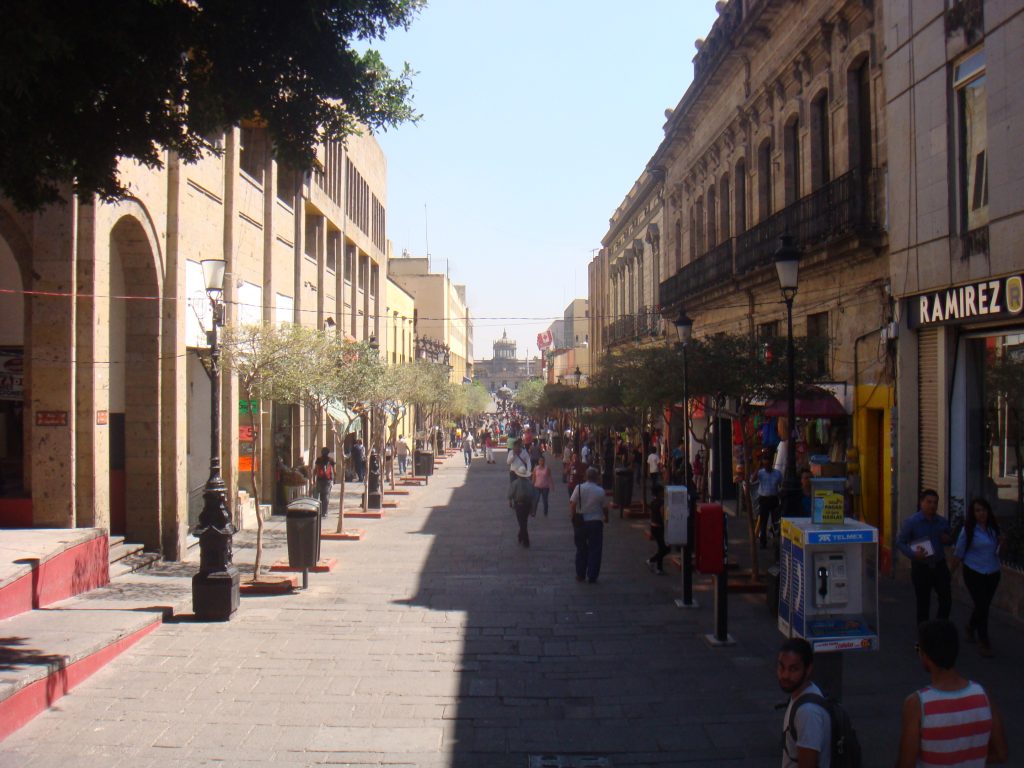 BC enjoying the Mexican company