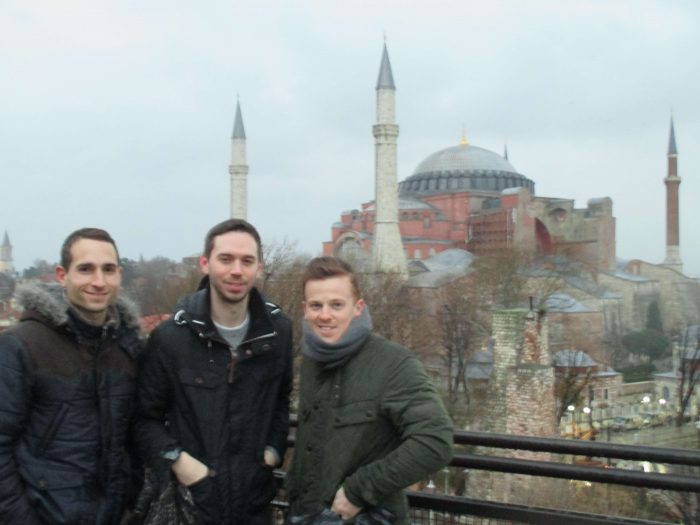 Often experienced due to lack of, or no sleep in an extended period. The sufferer will become aware of a slight warming as the impending pain begins. This will usually lead to a state of restless agitation, and finally to exasperation, which is often accompanied with the sufferer repeatedly putting his hands on head and then in to the air, repeated multiple times depending on severity. (please see photo 1 at the bottom).

I am in Istanbul airport alone, and with all of my bags, too early to check in and in the grip of a severe hothead episode.
But let’s backtrack 5 days and I’ll explain how I got here. About 7 years ago, a group of 8 school friends braved the sweaty, chlamydia filled streets of Kavos for an inbetweeners-esque holiday (though they probably got more action then we did) – and he we now were, 4 of us finally on another adventure together.

After multiple worrying texts back and forth amongst Dean and Steve – with regards to which suitable attire to wear, we landed on a dark and cold Saturday night in Istanbul, a few days before New Year.

Istanbul in winter? Who’s fucking ideas was this? I can hear their collective thinking, as we walk out of the airport. Mentally scarred from a flight where people were shitting on the floor of the toilet, while kids ran and spread it all over the carpet outside. Classic AtlasJet.

We are waiting for a complete stranger to appear, carrying our name. None shows, until Ryan returns with a man calling us ‘my friend’ (they never are/will be your friend) insists he is the anonymous man we are waiting for.

We are all very sceptical, until a sign appears with our name on it. He looks so untrustworthy we still have reservations, but if he is going to mug us, then fair play for the ground work and somehow managing to have our name on a sign. You have to appreciate hard work.

The taxi winds us around the coastal path, as we first gaze upon the various and impressively lit up mosques that are dotted sporadically, lighting up the night sky. After some outrageously steep back road driving the car pulls up and with some surprise and relief we see the hostel name, we are actually at the right place, and it looks like a winner from the start.

We get given the key to the room, and someone asks so who is going to have the key? Ryan and I straight away say ‘I’m not having it’. Dean perks up ‘I’ll have it’, the three of us look at each other in a look of horror, with the keys handed over to Steve without a further word said.

One of the decked out / made up hostels I’ve stayed in, we checked in and without too much mucking around and some short ‘lid maintenance’ by Steve, we were on our way out to check out the city. Slightly guarded – with hands in pockets – we walk into and among the huge crowd of people descending on Taksim Square (remember the square) and the neighbouring streets.

Even for a Saturday night, the crowds of people are almost overwhelming, and we head for a side street to catch a breath – already 3 or 4 bars having rejected our attempted entrance. We see a quieter looking spot and grab a couple of beers – I am just looking forward to sitting down and enjoying a very generously sized pint of beer, when I forgot to make my designated sound on the first drink (a drinking game that I would continue to fail out throughout the trip). Reluctantly, and with a moderate amount of swearing mixed with severe peer pressure, I finished it and grabbed another.

It’s at this point of the night where it can go two ways, we sit looking at each other, discussing the perennial first world problem/question of ‘are we just going to go out, or are we going to go out out’. The night is still in the balance – we take a stroll, dodging between the hordes of people and the dodgy guys trying to get us in to an array of shady venues.

It was looking like an early bath, until Steve spotted what I can only describe as a ‘Gary Shepherd Jackpot’ – a sign pointing to an Erasmus bar. It required at least one flight of stairs to get to, and going via the Ryan Cragg rule of ‘one most go up or down a flight of stairs for a goodnight’, it was certainly a decent start. Meeting our preconceptions, it delivered beautifully; cheap drinks, lively atmosphere and full of students.

Many beers later, with a notable amount spilled over myself and with some suspect dancing with ‘the turkish one that got away’, the place started to empty. In the toilet a local said this was only the starter bar, and despite it already being 4am this was just the beginning. None of us quite had the energy to carry on – the tiredness of the day and flight catching up on us, as we made it back for a respectable 4.30am.

The next few days were a pleasant and relaxing mix of watching football (world class Chadli), drinking coffee, relaxing on the rooftop hostel bar, attempting some local lingo, eating a probably unhealthy amount of meat and also catching some of the sights. Complete with insightful tour guide Dean “I’ve seen that in a game” Shipp.

Amongst this we also had a different/failed night out involving very dodgy bars, metal doors, lifts that don’t open but keep going up and down and last but sadly not least, a karaoke bar which probably has a sign up or our pictures in a ‘do not allow entry’ poster. Attempting a Swedish Eurovision song (the only English song on the list) , it was my first attempt at Karaoke, but perhaps more tragically this was to reoccur in the next few countries I found myself in. (more on that later).

Talking of countries, Deano couldn’t stop bragging about the 18 countries he had visited, to anyone that would listen, while Ryan struggled with fives (hold on hold on, I’ll count us in…5!). There were bonding sessions in the Turkish baths (it’s okay we’ll scrub each other), along with many a game of ‘who’s lid this this?’. I also learnt never to challenge or accept a challenge from Dean that revolves around pizza; his 28 slices to my 23 was just ludicrous.

We also caught a cool (too cool for us) jazz band playing in the hostel bar one night, and met the living, breathing girl of Ryans’ dreams – just a shame she was with the jazz guy. For New Years itself, we spent a relatively low key night drinking in the hostel bar with some ‘kind-of-yank-friends’, which saw the business card get a first of a kind snap with its original owner Steve.

I’d forgotten my usual annoying prick thing to do on NYE, where I start false countdowns for my own amusement, but before I knew too much about what was going on, fireworks were echoing around as flashes darted off in the distance.

The rest of the night grew stranger as the early hours started to tick by. The previously rammed hostel rooftop bar started to empty of the usual crowd, and were being replaced by more locals – which all seemed to be the friend of the biggest prick barman of the year (so much of a hipster prick, you couldn’t not enjoy hating on him).

Steve, at some point, was approached by what could only be described as a ‘worldy’, which would have been great for him, barring the appearance of a Zlatan Ibrahomivic lookalike behind, who lurked suspiciously. They then both asked him to come out with them in the city. Steve suspected some sort of arrangement that would mostly likely see his wallet change hands – or worse – his lid temporarily damaged (beyond a simple lid maintance repair in the toilet) in a fracas.

It was approaching 5am and the atmosphere in the bar began to turn strange. We returned to the room, trying to work out what had happened. Had Steve just pulled a worldy, or had he survived a close call? It wasn’t long until the taxi arrived to take us to the airport, with the early stages of hot head beginning to beginning to manifest itself amongst us.

The taxi was a silent affair, as we each contemplated the long journey ahead of us. Them: a trip back home with the inevitabilities of work. Me: a 7 hour wait at the airport, followed by a 9 hour trip to Japan, straight on to a bullet train for I’m not even sure how long.. I didn’t want to even think that far ahead.

It was with a sad heart when we bid each other goodbye, with hot head arm waving actions all round. Buying the largest coffee I could find, I thought at least the free coffee wi-fi would be able to keep me awake? ‘Only for people with a boarding pass’ I was firmly told . ‘But.. But… I mumbled, I have to wait here 6 hours before my flight, it isn’t open for me to get a boarding pass’. If there is anything blanker then a blank face, this is what met my whimpers.

I look at her straight in the face before all I can muster is ‘that is very, very, very kind of you’. She doesn’t even twitch as I slump in to the nearest stool, absolutely defeated and dreaming of beds, bed linen, cushions… everything I look at somehow resembles a bed. Half-dosing, half trying to stay awake, hot head had taken control and was almost at boiling point.

So this is how ended up at Istanbul airport, alone and exhausted. Shady looking characters seemed to walk back and forth all around me as I take a long swig of the coffee. I can tell this is going to be a long few hours as I notice a man taking a close look at my bags. Must stay awake. Damn you hot head, damn you… 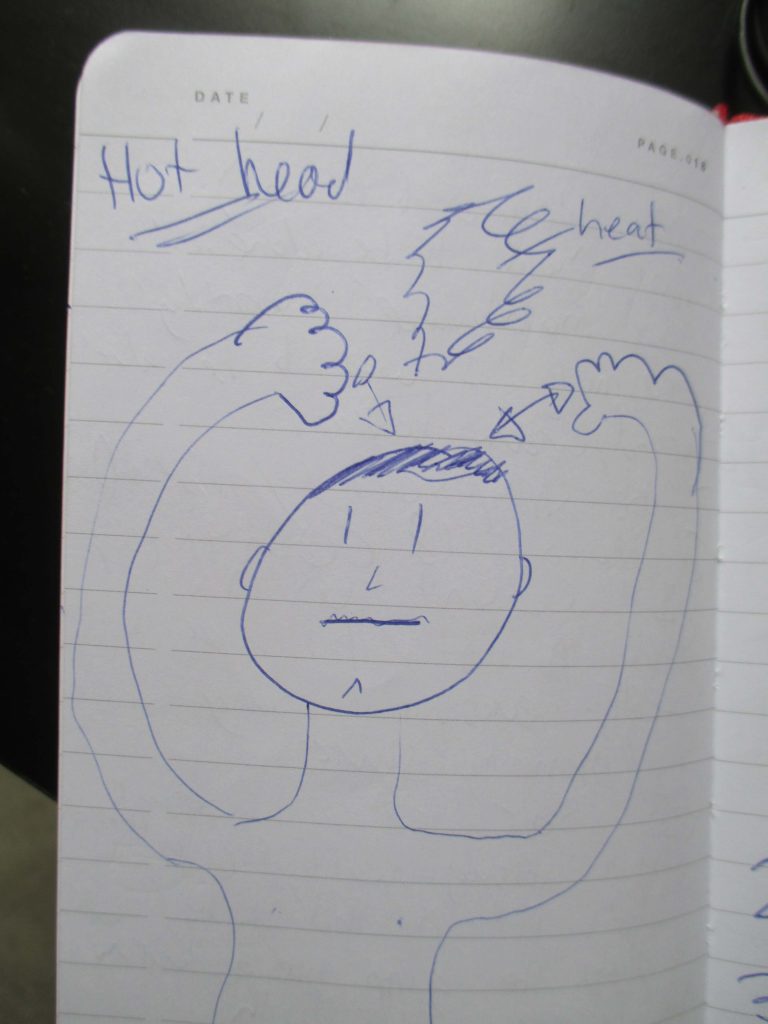 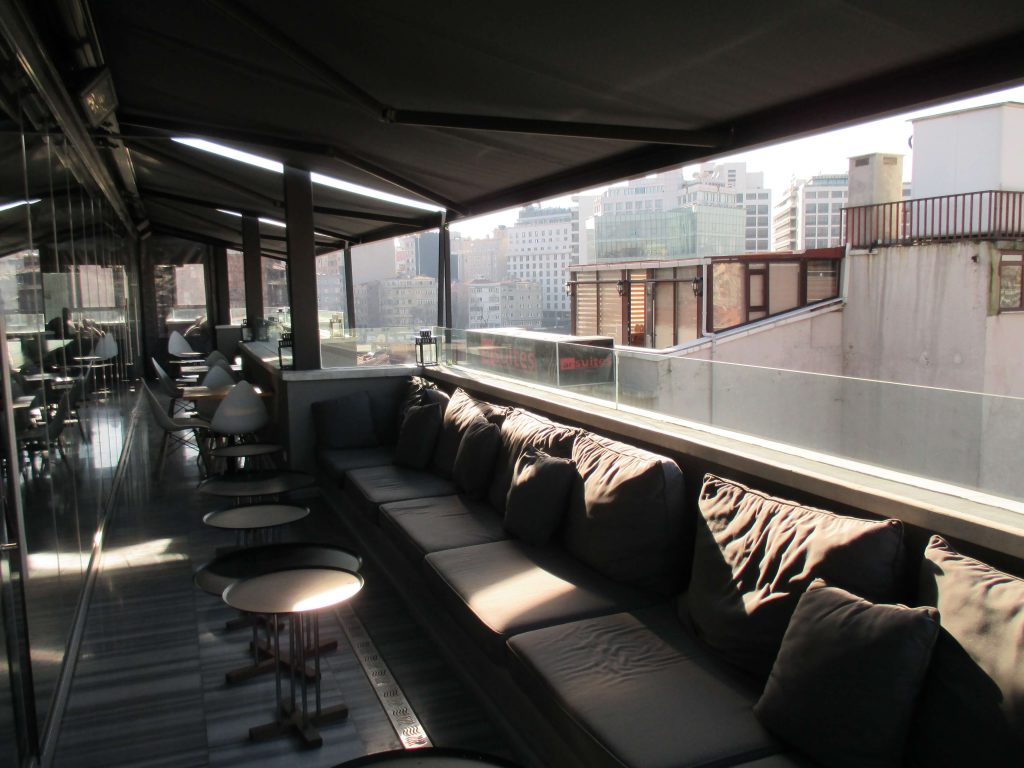 Rooftop bar in the hostel 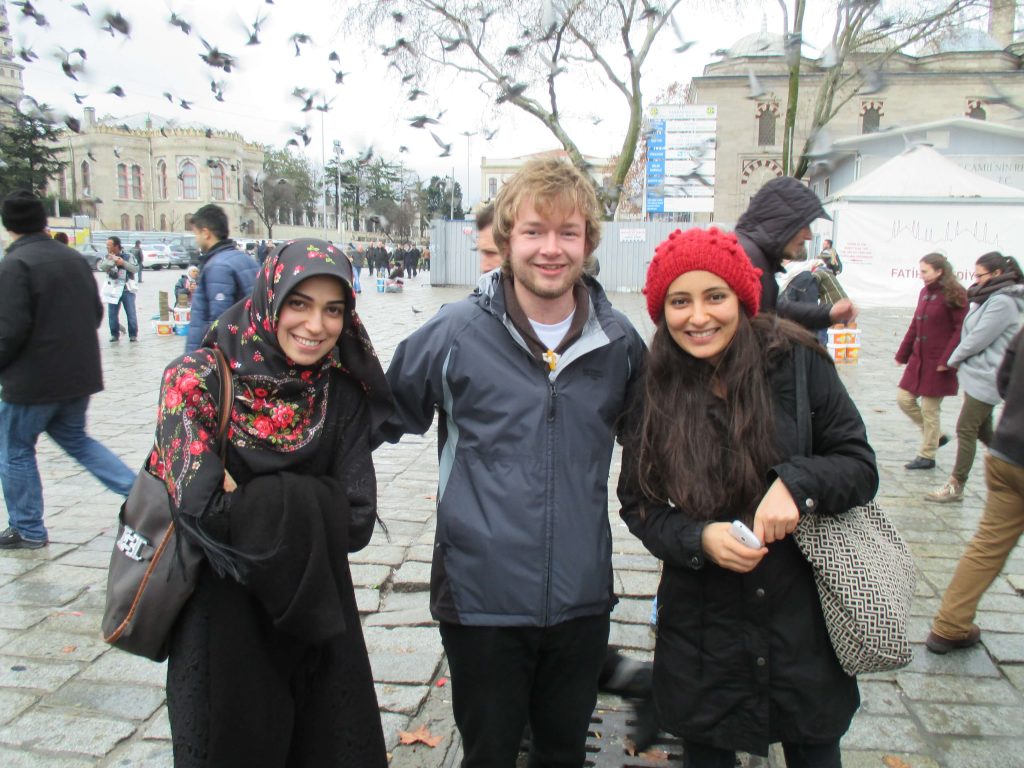 ‘I’ve seen this in a game’ Dean Shipp 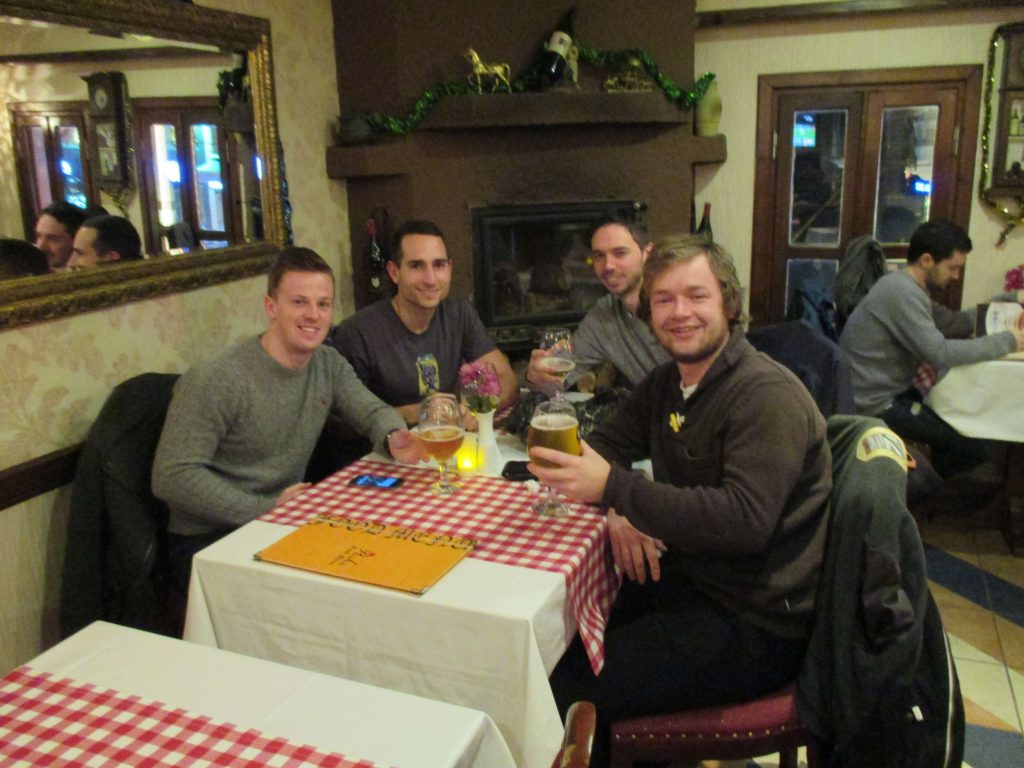 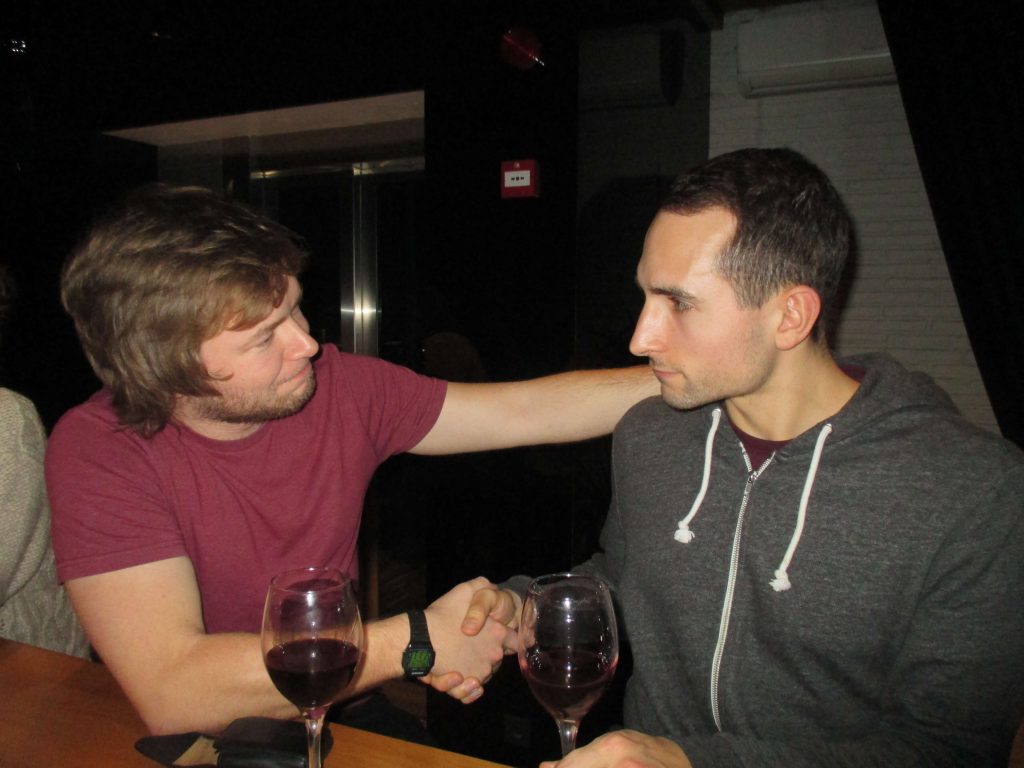 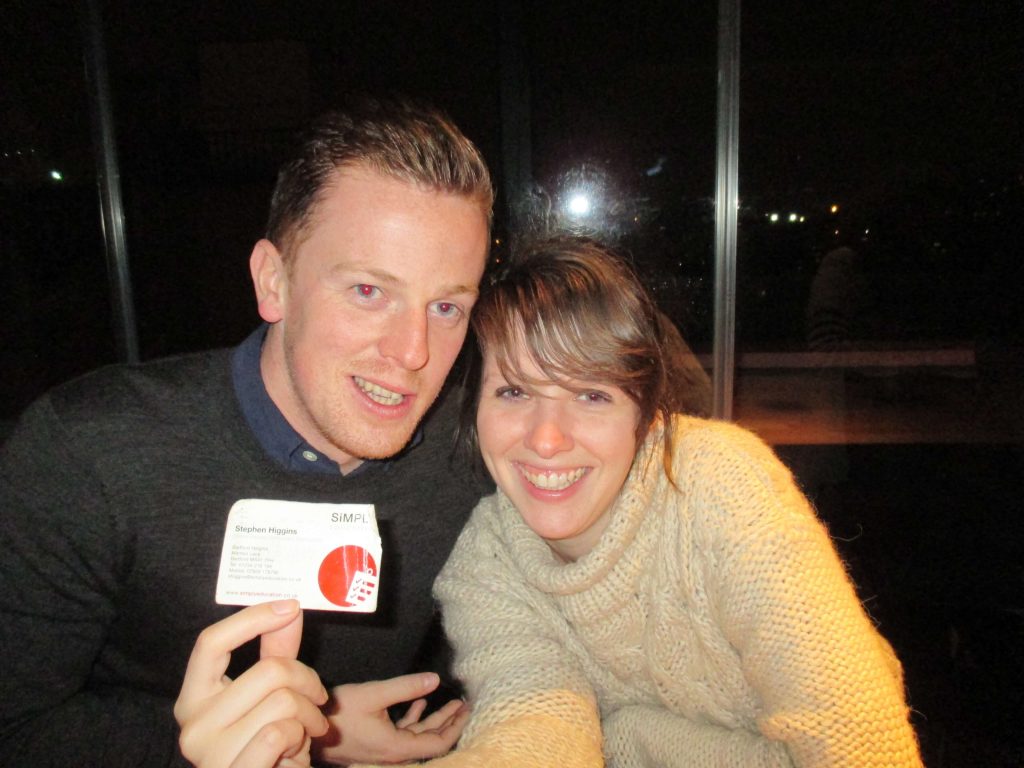 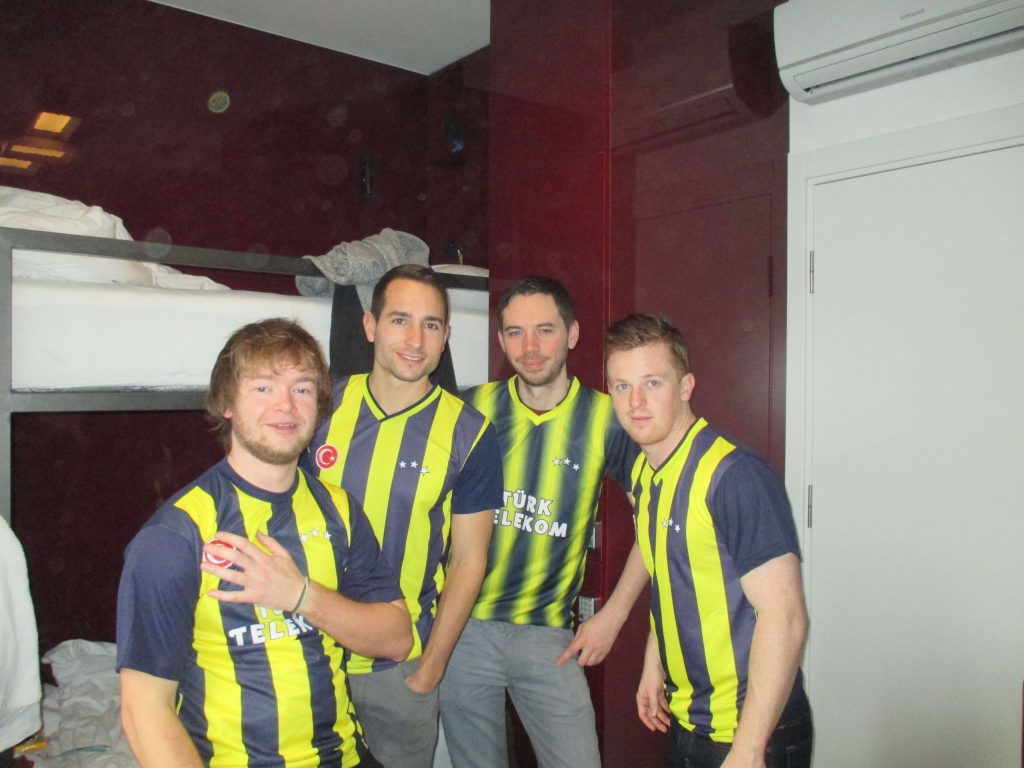 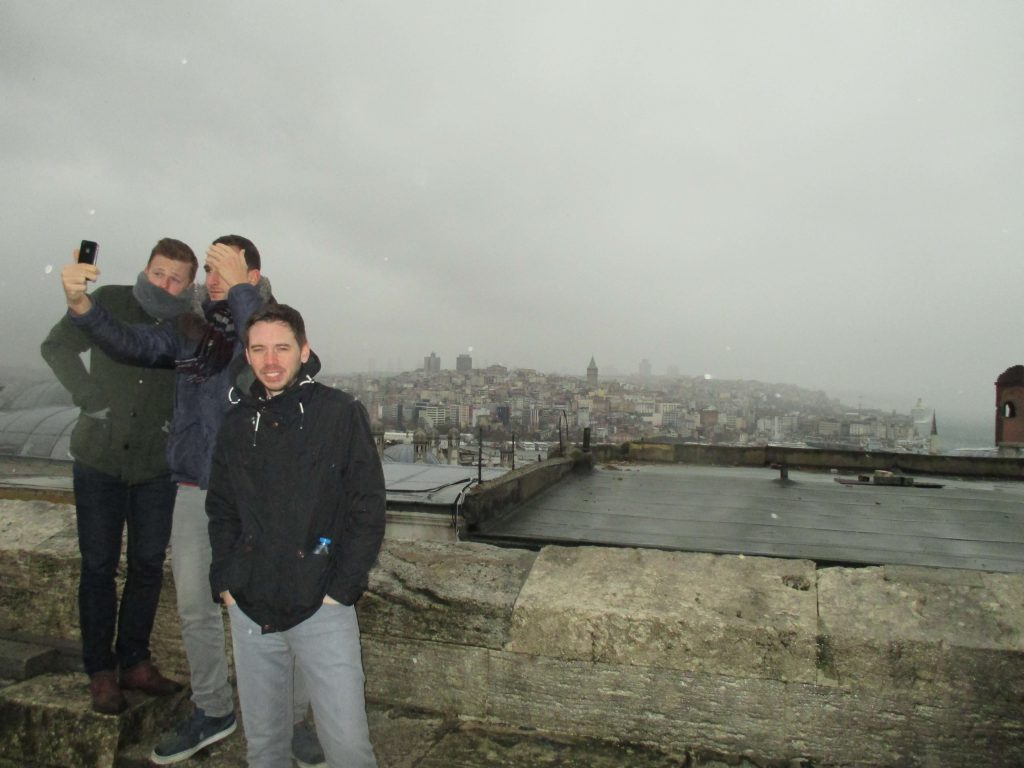 One thought on “#28 – Turkey, Benjamin Istanbul-i”