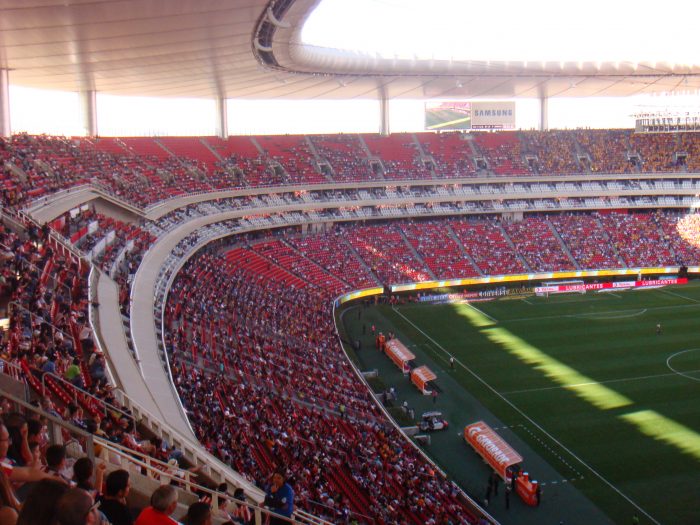 Six guys crammed in to a taxi: two in the front seat, four nestled in the back, in broad daylight and speeding towards the Chivas football ground – the Estadio Omnilife. The taxi driver is laughing and joking with us as we weave in and out of the traffic on the way to watch my first Mexican football game.

He drops us near the stadium in convenient place for him to turn around, and we start the sizable walk down the road to the stadium, as the sun beats down with not a cloud in the sky. Thirty seconds later and one of the guys spots a pickup truck with three girls dressed in football shirts riding on the back, heading to the entrance of the ground.

He shouts over and asks if we can join, and before they have replied we are running through the traffic and scrambling up to the moving truck. We scramble in as it is still moving and we joke around with the girls as we cruise our way down to the entrance of the ground. The business card jumps out of my wallet for a quick snap, just before we come to a halt and jump out of the truck. Turns out it wasn’t even the girls truck, but two guys were driving and the girls were also hitching a lift.

Outside the ground it was like a mini carnival with DJ’s, live music, dancing cheerleaders and plenty of food. The game itself was a pretty dismal 0 – 0 draw, but the atmosphere inside the ground more than made up for it. The hardcore Chivas fans were behind the main goal, bouncing up and down singing through the entire game to the beat of the drums, meanwhile in the corner towards the top of the stadium the travelling Monterey fans were also in good voice, jumping around despite, or perhaps because of, the lacklustre affair on the pitch.

Despite a disallowed goal to the Chivas, there wasn’t much action to speak off as the referee blew the final whistle. But that was when the real party started. The first thing that struck me as odd, was that no one seemed to be in a rush to leave the ground, as some meandered towards the exist, others just staying and talking. We hung around for a few photos with some Mexicans who were sitting behind us and made our way out.

Immediately as we left the stadium, there was a make shift stage set up with a dozen or so musicians playing some fast paced Mexican music, with a dance circle and large crowd watching. You could have been fooled in to thinking Mexico had just won the world cup, and that the 0-0 draw had been quickly forgotten. We watched on amusingly as more and more people joined in with the dancing, with Mexican men seemingly approaching random Mexican girls, offering their hand to dance, and either having them run away embarrassed or dart off to the dance floor.

After half hour or so of watching, we made our way to one of the DJ’s playing to a decent sized crowd. Families were dancing around, a real mix of old and new, home and away fans. We get speaking to some Mexican girls, one of which is at the game with here with her mum and brother and is teaching me a particular Mexican dance which I’m pretty terrible at (recurring theme).

A few minutes later and the start of a song comes on and everyone except us all begin to face the same way, ready for some sort of mass dance performance. We looked round, exchanging completely baffled looks with each other, as everyone starts to jump several steps to the right, then back a few, spinning around and careering off in different directions, all in sync with each other.

We are all grinning away, trying to fit in with dance steps and attempting to avoid being smashed around by the crowd, laughing as we go. The Mexicans are finding this hilarious and a few of them trying to help us out, but it was in vain – in what I’d loosely describe as some sort of line dancing. I’d say it would be akin to dropping an Eskimo in the middle of a Macarena dance and watching them flail around. I’d never really considered sober dancing to be anything other than an awkward foot shuffle, but all of us were unashamedly enjoying ourselves.

It was probably 2 or 3 hours after the football game had finished, when we finally made our way over to the road to flag a taxi down. The first one to stop was happy to take 6 of us in the car, so again we piled in and rode back to the Hostel in good spirits.

So having decided to extend my stay yet again in Guadalajara, I have been passing my time with a combination of listening to Spanish lessons on my iPod, eating awesome food, relaxing by the hostel pool, wandering around Guadalajara, cycling, football and even my first Salsa lesson. I had some serious reservations about the Salsa, combining two things I’m not very good at – understanding Spanish and dancing, but it actually turned out pretty decent. Seven or 8 people on a rooftop of an apartment, and luckily for me also some absolute beginners, and even a girl who was able to translate some of the teachings to English.

Playing football in a foreign country has always had an allure for me, and even if there is a language barrier, football has a magical way of breaking it down to put everyone on the same page.

One of the Mexican hostel workers took us over to a park with a football cage, where we played and beat quite handsomely a team of the locals. The good spirits of our International victory was short lived as a wayward shot after the match landed the ball in the path of an oncoming bus. We returned two days later with a new ball, and played for 3 or 4 hours against much better opposition, and returned to the hostel feeling far less smug then the previous occasion.

As I type, it is 1.30pm, the sun is out as usual, and the hostel pool is beckoning. This hasn’t been a very interesting or funny blog, but hey this is Mexico – traaaanquilloooooo mi amigo! Menos es Mas! 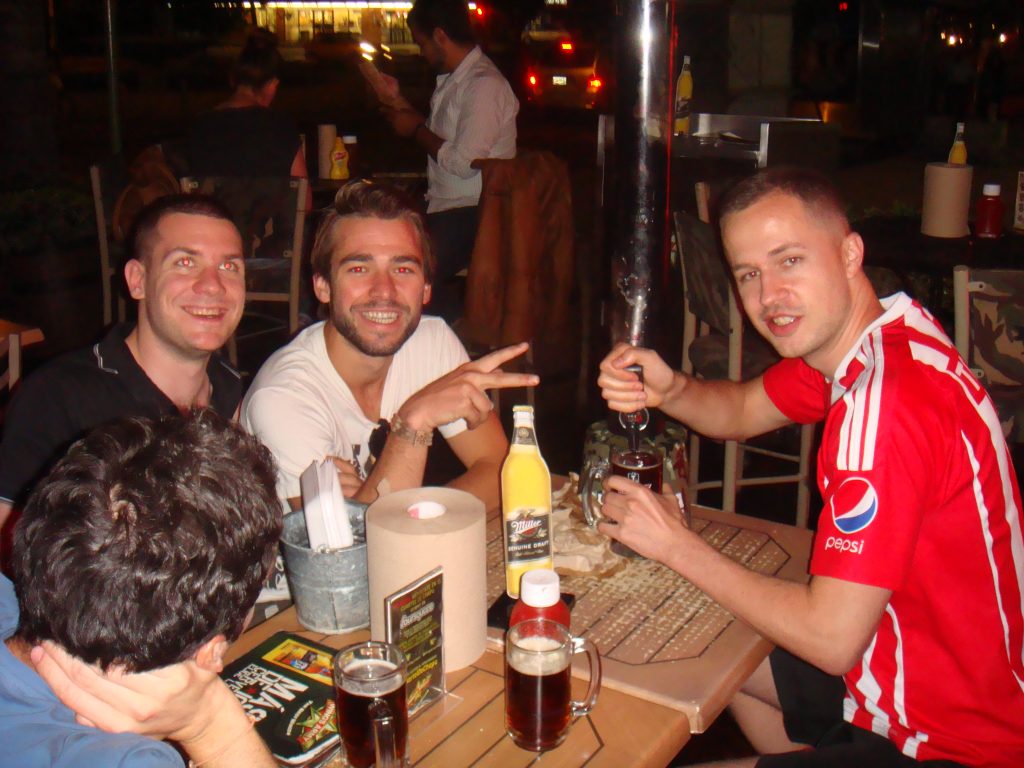 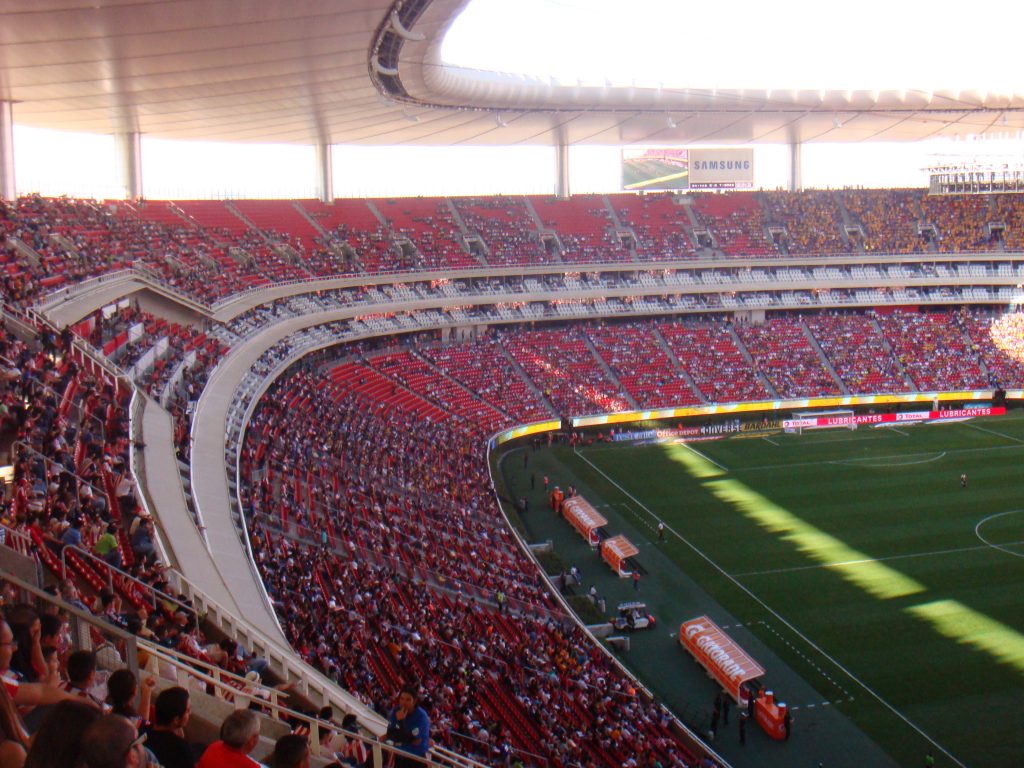 The Estadia Chivas filling up before kick off 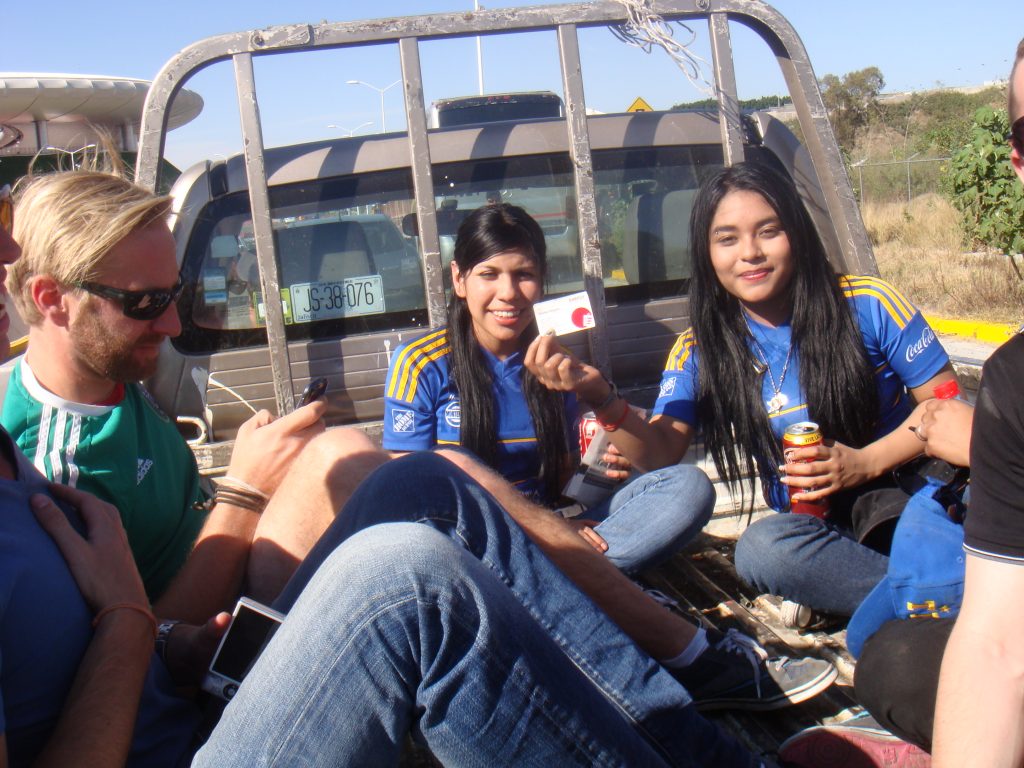 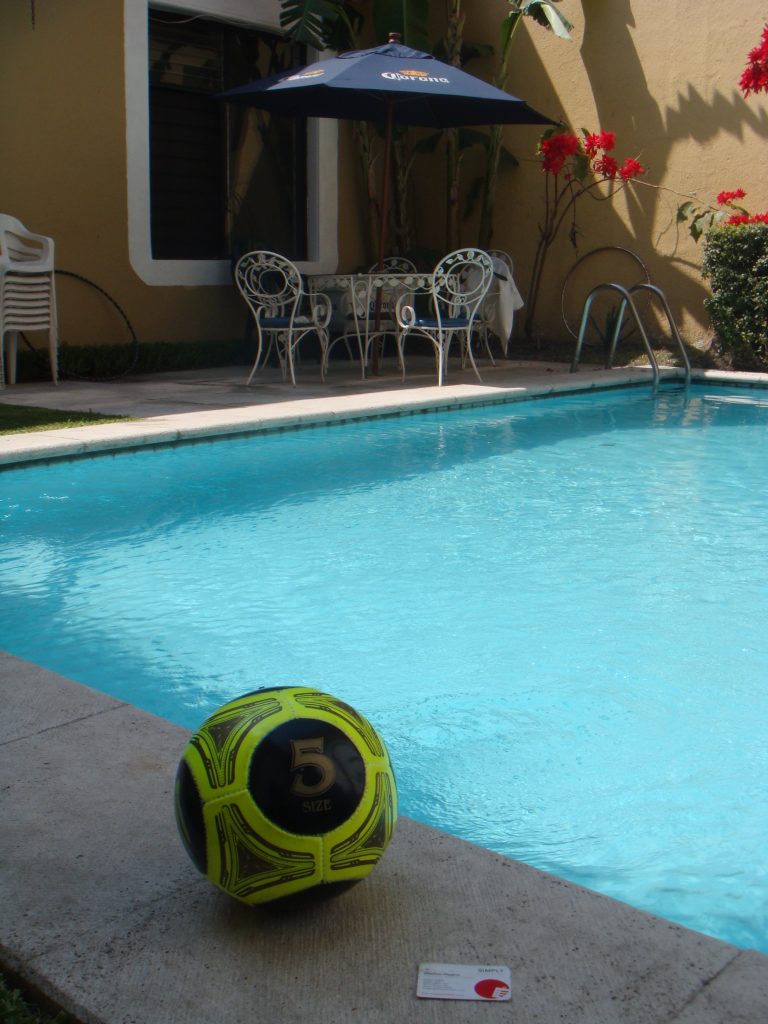 Business card having a kickaround by the pool

(Other things of note: Davids leaving party, Donkey and the Chicken, Burning the piñata, market g, Mexico no change – cambiar, bounty hunters, ‘no bueno”, too much bar americas, airline)