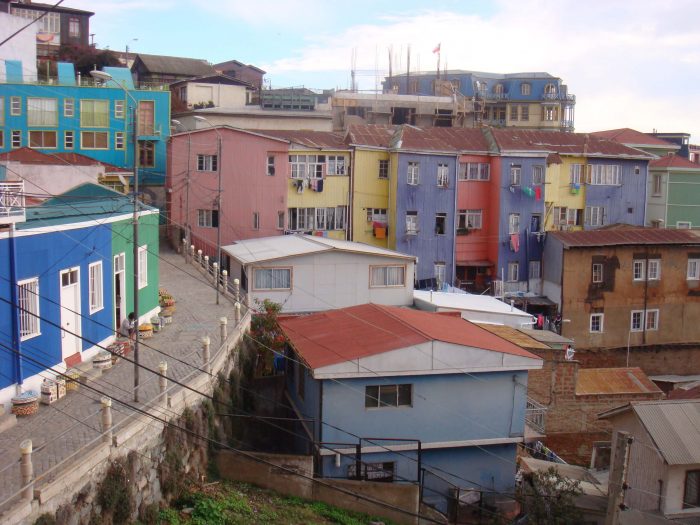 I’ll remember Valparaiso for two reasons – the first is for street art, while the second was falling in love with a group of dogs – and by group of dogs, I’m not talking about a group of girls you find in Lloyds at 2am on a Tuesday – I’m talking actual 4 legged shit-where-I-want wild but awesome dogs.

One can imagine this place in its fully glory in the summer season, unfortunately it was a cold few days for my stay which wasn’t helped by a usually cold shower in the hostel. I stayed 4 or 5 days, though looking back this was certainly enough time to take it all in.
The downside of being a graffiti hub is that amongst all of the great street art, there is also plenty of boring and degrading ‘tagging’. Partly because of this some parts of Valparaiso are beautifully colourful and quirky, while others look weathered and gloomy – but back to the story of the dogs.

From what I can remember it was midweek, maybe a Tuesday or Wednesday. Adding to matters it is off-season and winter, so there is nothing really going on. Nothing except the world cup of course -so just after midday and armed with a bottle of rum and a group of Aussies we watched Chile v Netherlands in the hostel.

The dutch won the game 2-0, so I assumed any party was cancelled but the aussies were fairly confident there would be people still out after the match, so we continued to drink despite the loss.

I should have known by this point in life not to try and keep up with Aussie drinkers but alas I like a challenge and the next several hours are a bit of a blur. Though there wasn’t really anyone out, we meandered our way through lots of bars and meeting locals until one group of Chileans took us to some sort of underground place that was more of a cavern, or perhaps a ball room in another era.

We were here until the early ours and it was on our way back from this strange place where I had the idea of walking up the nearby hill to watch the sun come up – it was around 5 or 6am, so surely it wouldn’t be much longer?

The aussies agreed and we set off and almost immediately gained some canine friends. At first we thought it was quite funny that they were following us, but it soon turned in to a full-on stalk.

It was about an hour walk up to the top of the hill and the whole time the 5 dogs surrounded us, as if protecting us and scaring any potential dogs or people away. There was an obvious leader, who we named Brian (unsure why), and on the course of the walk we nicknamed the other four. (Scout, Snowy, Maverick and one other that I can’t remember the name of – lost notepad doh).

We became fascinated and increasingly close to our new mates as we watched the group dynamics of the strays who had apparently formed a tight group among themselves. Brian was clearly the leader, and he walked close to us while the others went further ahead, seemingly checking it was okay and shouting at anything that moved.

He held his head up high and was clearly top dog. Scout was the young upstart, always at the front, as if trying to prove himself to the group or Brian, and the first to bark at any trouble. At times scout went a bit far and got a big too big for his boots – Brian took him down a peg or two, calling him out by growling menacingly and scout would back down. Alpha male dog politics at work.

We quickly learnt that we couldn’t pat any of the dogs without Brian getting jealous and angry at that dog and by the time we reached the top of the hill, we felt part of the pack.

Almost as if they sensed it was our goal, they spread themselves around us and sat down, taking in the view just as we were. We waited for nearly an hour, with the dogs still around us, sitting relaxed, some of them even laying at our feet or laps. It was maybe 7am and still no sign of any sun, so giving up on watching the sun rise we headed back down.

The dogs followed us all the way to the door of our hostel, where I ran in to get my camera and a few snaps, though they must have been a bit camera shy as I only caught a couple of them. It was a bit of an emotional goodbye to the dogs, who we’d spent two hours or more with, and who had loyally protected us on our cross city journey the entire way. We sneaked them some food from the hostel and went to bed as they sat outside, patiently waiting for us to return.

The next day we joked that they might still be waiting outside, but they were gone – just as it was my turn to move on too. Not knowing where to go and only knowing I wanted to stay in Chile while they were still in the world cup, I asked a friend to flip a coin.

He asked me what the options were, I told him it was either go bay back to Santiago or North to the unknown, he didn’t even flip the coin. Go North he said – so north it was to La Serena.

La Serena was a peaceful and quaint city that had a youthful feel. Being the off season there wasn’t many other travellers and one night I headed out on my own to a bar – making friends with a couple of locals and some bar staff.

The following day was game day – Chile v Brazil. I bought a fake Chile top in the street for a couple of quid and headed in to town to watch the game.

There was an electrifying atmosphere in the air, a real sense of belief, optimism and hope. It was a cracking atmosphere for the game, and I ended up getting adopted by a father and son who were sitting nearby. Together we watched the game as it ebbed back and forth.

As it reached extra time the tension reached fever pitch as a last minute shot by a Chilean flicked off the bar and over. Penalties! Maybe because I have had to watch England several times on penalties in recent years I was more nervous than the Chileans.

It started badly for Chile, missing their first two penalties which they never quite recovered from. As Neymar stepped up confidently to slide in his penalty, Chile needed to score the next one to have a chance of progressing.

Gonzalo Jara stepped up… the bar bustling nervously, Chileans consciously or subconsciously with their hands pressed together as if they were praying. He strikes the ball… OFF THE POST and away to safety. For a second or two complete silence, almost disbelief. Then a few thuds of fists on walls or tables, a few shouts of anguish and then followed by hours of mourning.

Walking out of the bar, saying goodbye to adopted father son it was like walking in to a city of mourning. I didn’t see any anger, just complete and utter sadness and disappointment. Returning to the hostel I joked with the staff ‘now we are Colombian!!’ but they were inconsolable. To come so close to upsetting the hosts and what would have been the biggest winning celebration, it was heartbreaking to see.

I’d witnessed the most passionate and incredible fans and now Chile, my adopted team after England had been knocked out. After spending a couple of days in the charming city and making some great Chilean fans it was sadly time to move on. North to the Desert and now supporting my third adopted team, come on Colombia! 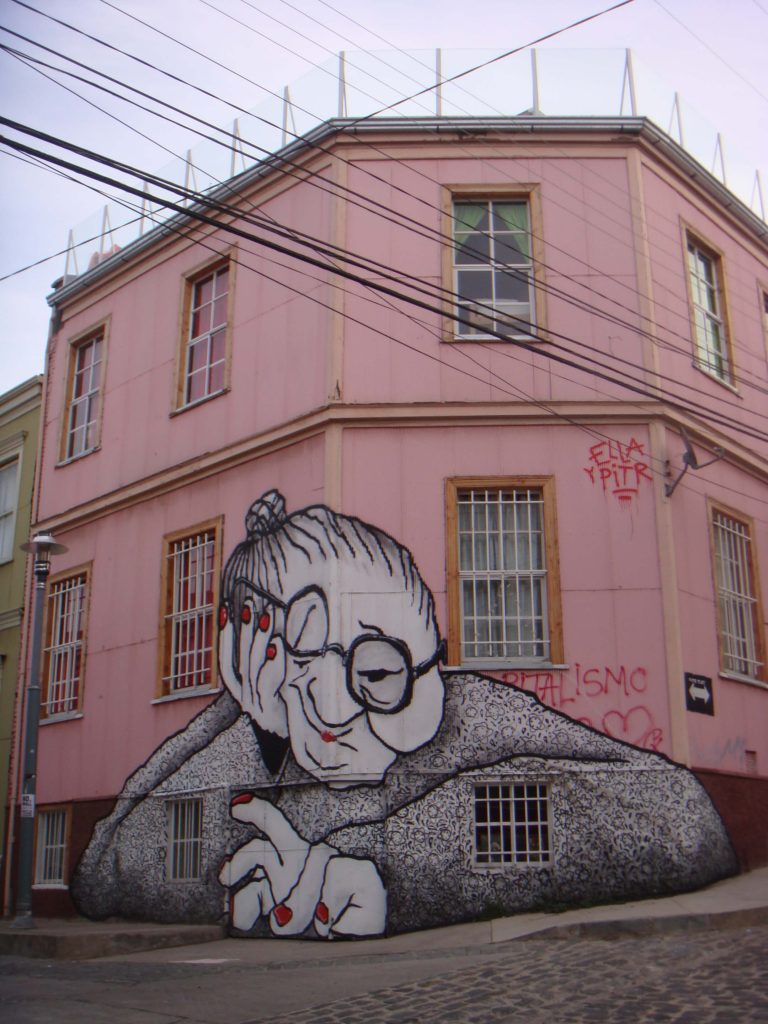 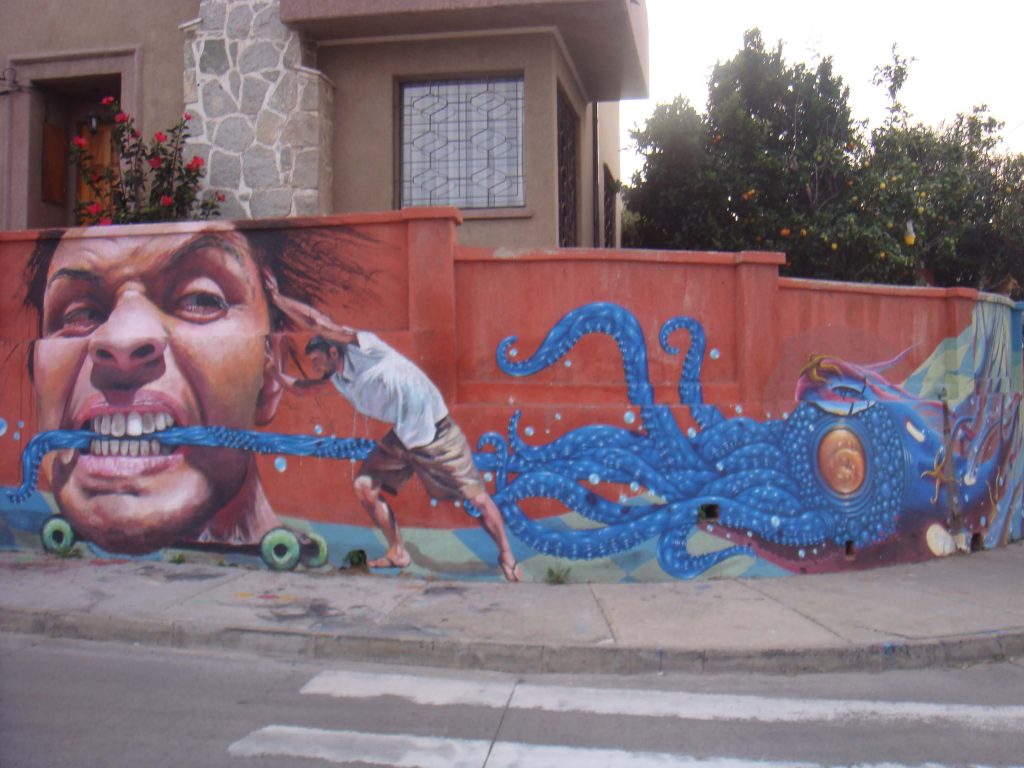 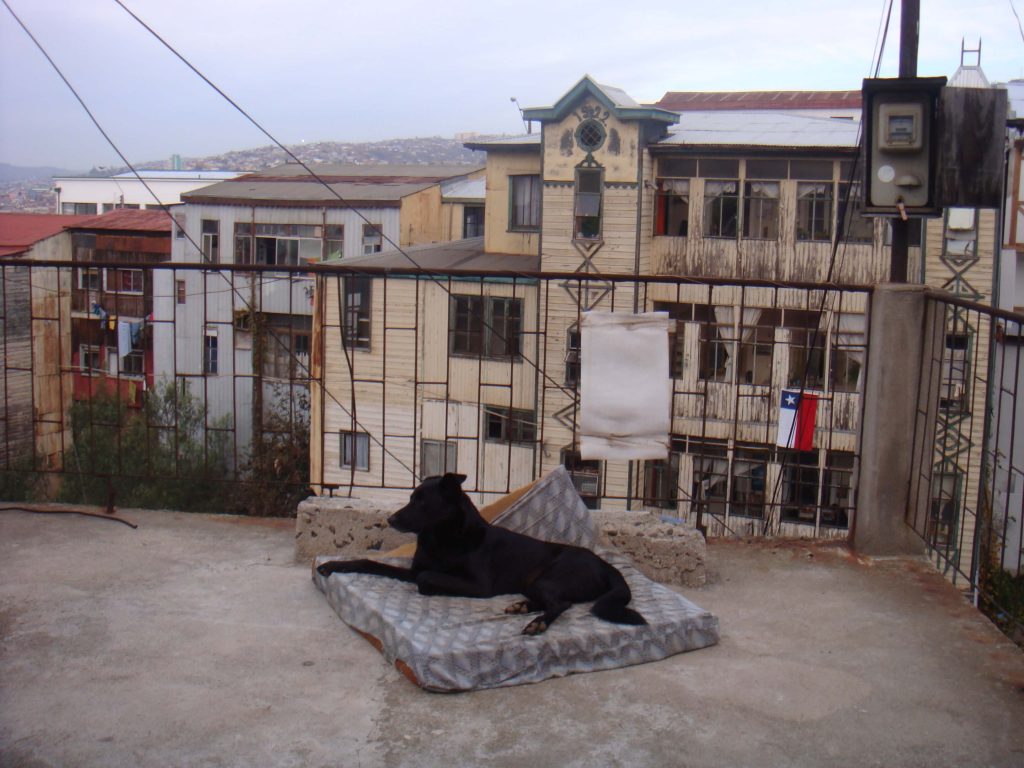 Not a bad place for a dog bed 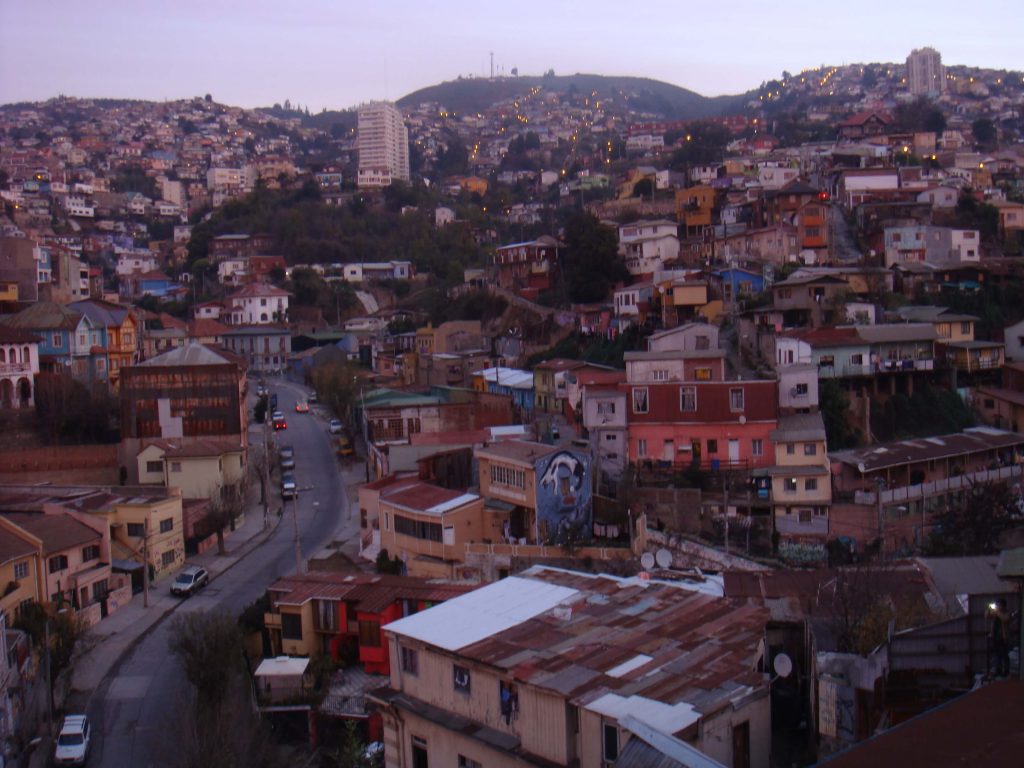 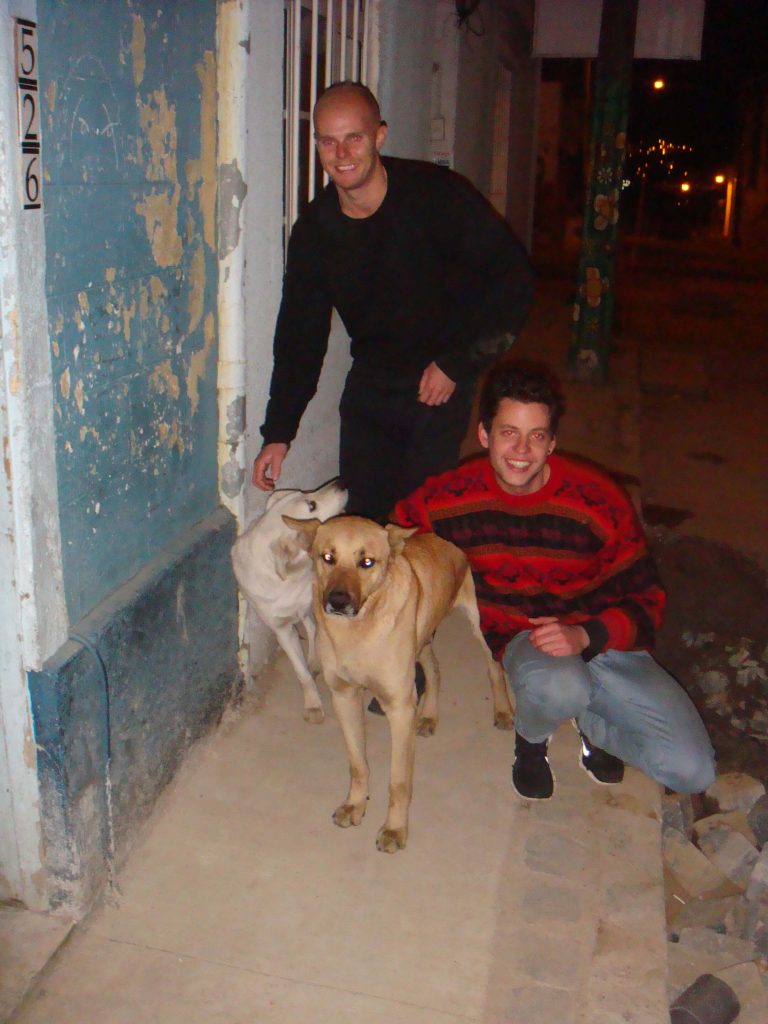 Two of our dog family 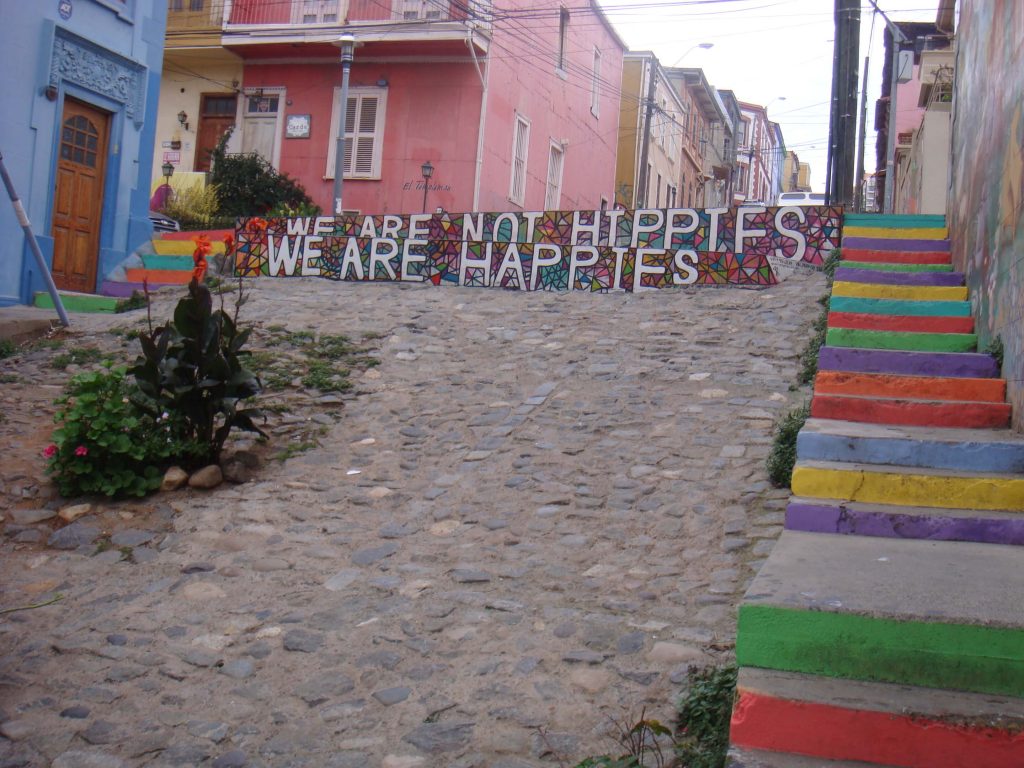 You can use the bike… 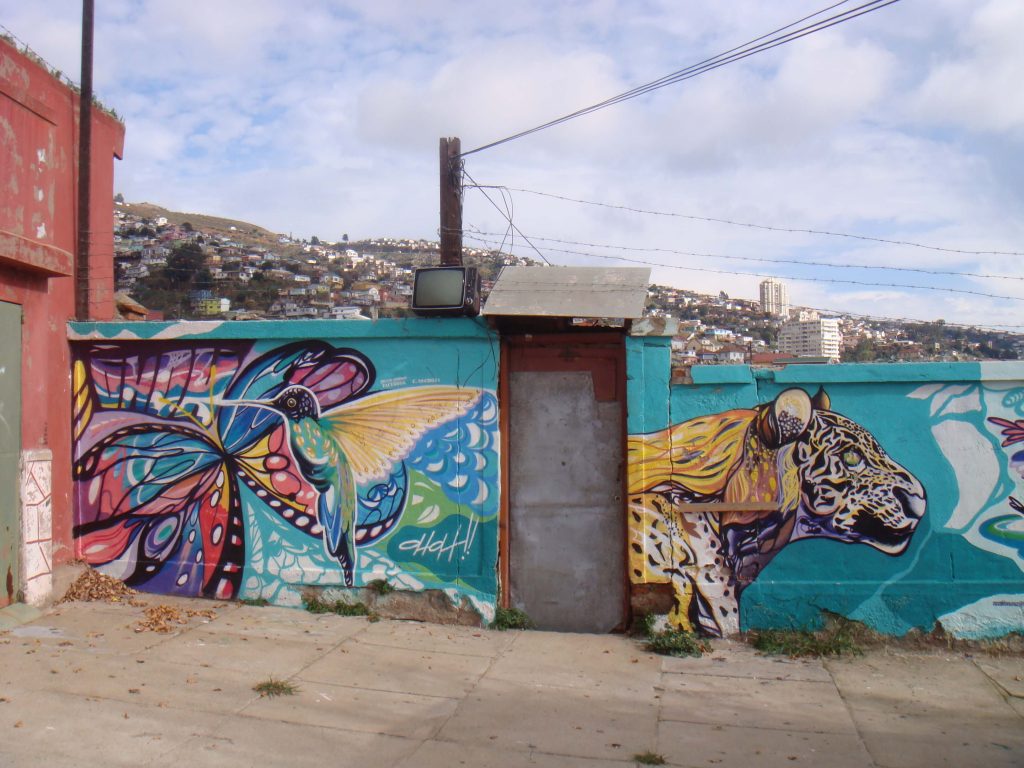 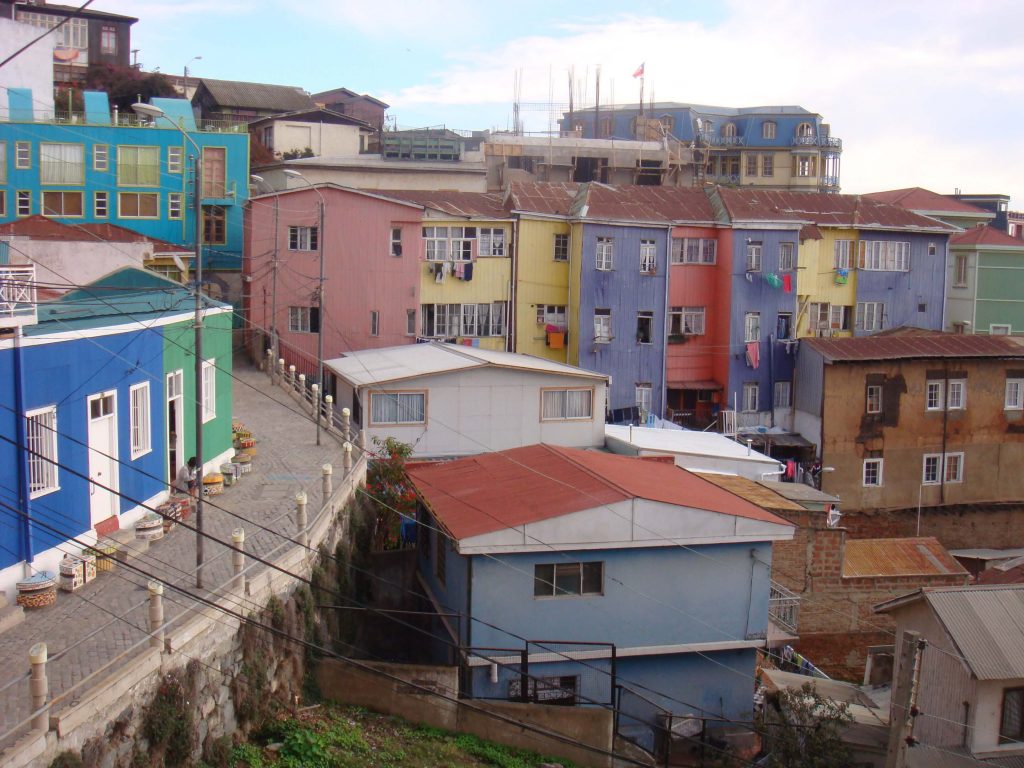 Another colourful set of houses 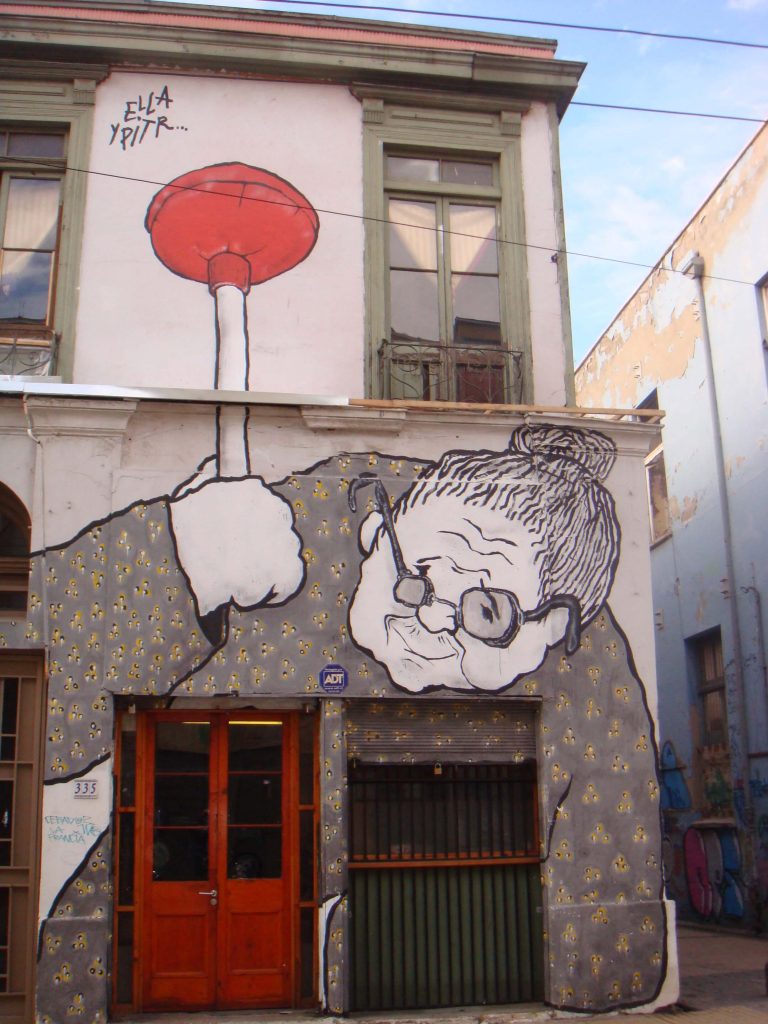 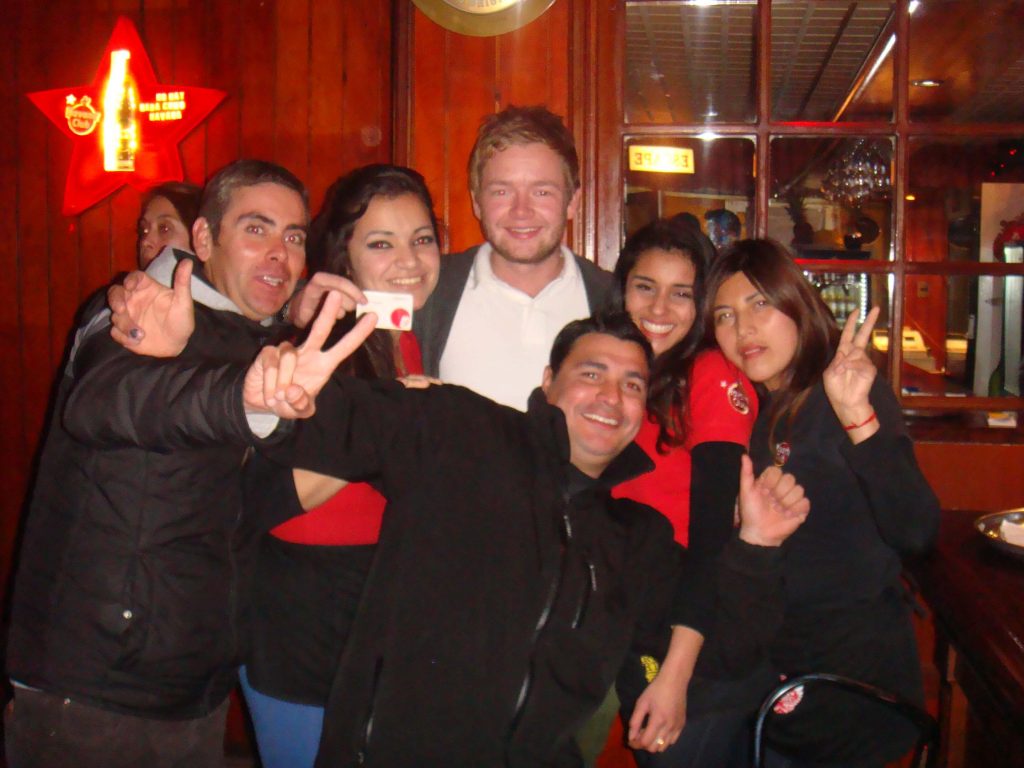 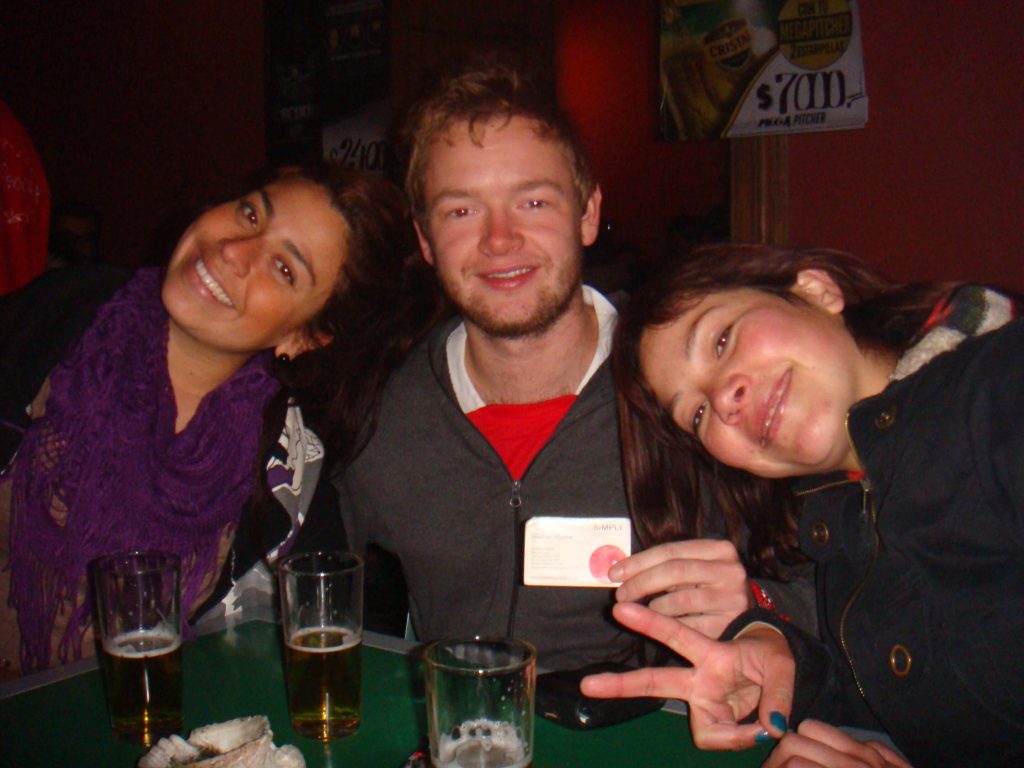