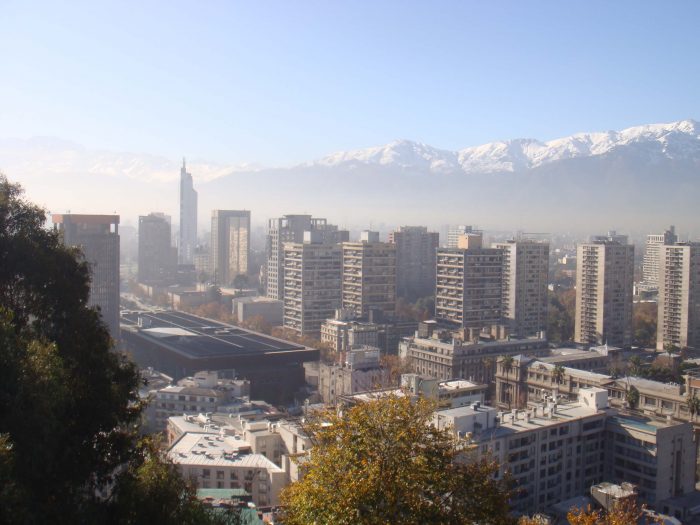 Game day in Santiago. Red shirts fill the streets of the capital and everyone has that eager look of excitement and hope on the day of a big match… daring to dream. Chile v Spain – a win would see them qualify for the knockout stages of the world cup with a game to spare – and from one of the hardest groups in world cup history.

I gaze out from the balcony at the city, Chile flags can be seen from nearly every building, as cars and buses are tooting on their horns – it echoes around the early morning streets as I slowly wake myself up. Chants can be heard sporadically from the 16th floor of the apartment I am staying in (thanks to my Spanish mate from New Zealand Raul – cheers Raul buddy!) and you can tell the anticipation is building.

I was sharing Raul’s apartment with another Spaniard (I should say Basque country) Juan, who was also crashing there for a few days. We decided to catch the first half of the game in the apartment while we had some food, and then head down to a big screen somewhere for the second half.

The game kicks off and with 20 minutes played Chile score the first goal, and the enormity of occasion for the Chile fans really hit me, today this means everything to them. What I can only describe as a huge roar rings out around the city, echoing off of all the walls and bouncing around like nothing I had ever heard.

I rush to open the balcony door and the noise intensifies – it sounds like an army of thousands charging in to battle, the hairs on my neck completely on end – and yet the streets below us are all deserted apart from Taxi and Buses, who are now honking like crazy.

The second goal, as sods law would have it, came when I ran off to the toilet for a moment. The window was slightly ajar in the toilet when a scream of even greater volume comes flooding through. They’ve scored another, surely not!? I run back in to see the replay – ok, now we have to get ourselves down to a bar or screen to watch the rest of it!

In time for the second half we scamper to a nearby bar and watch Chile close out the game comfortably 2 – 0. An incredible sight to see, the Chilean fans even on the 89th minute cheering wildly each defensive block or clearance. As soon as the final whistle sounded, as if the game was still in the balance, the place exploded – it was as if they hadn’t quite believed they had won until the whistle really sounded.

Hundreds of people were already streaming out on to the strip of bars we were at, all making their way down to the Plaza Italia which is the historic centre for celebration.. apparently. It is only early afternoon by this stage, and we jump around a bit, had sing along with the fans and after a couple of hours I start thinking about the next match on later that day, but Juan assures me this is the place to be.

One way or another he was right, and after a few more hours pass buy and a few more beers were bought from people selling them from supermarket trolleys, things started to get pretty rowdy. The police had sectioned off parts of the Plaza, particularly the main monument, and as the time went on the crowd had overrun the police and were climbing all over the monuments in triumph.

People were scrambling to get up there, fighting for space and occasionally falling back down in the chaos of the moment, lucky to not escape injury or worse. To begin with I was frustrated that I’d left everything valuable at home (thanks to the advice of a very wise chilean) and all I had was my small notepad, wishing I had my camera, though I was soon completely reversing my thoughts as three different people attempted to pickpocket me during the celebrations.

Things were starting to take a bit of a turn by this stage, some people were climbing on bus stops and one or two small fights broke out, but in the general scheme of things it wasnt too much of a big deal. This was until the police, fully clothed in riot gear appeared in one of the corners. Trigger absolute chaos.

All of a sudden the people, who had been relatively jovial up until this moment, suddenly turned their exciteable anger on the police. People started throwing things which were small at first, and started getting bigger with time, some were smashing up traffic lights and throwing them in the direction of the police while others were grabbing the barriers which were early used to protect the monuments.

Next, things started to catch fire in the street – or rather were set on fire, and it started to resemble more of a war zone. It then wasn’t helped that the Police started firing tear gas at the crowd, causing huge stampedes of thousands of people running in each and every direction.

Somehow me and Juan managed to stick together, and as he told me with a big grin ‘this is just entertainment for us in the Basque country’ he took his tshirt off and covered his face. (I assumed to stop the tear gas and not that he was preparing anything crazy). I figured he had probably been to a few Basque separist riots in his time, so if I stuck near him I’d probably end up alright.

The police attempted to charge a number of times, and each time the crowd ran away only to regain their position in the plaza minutes later. Then the water cannons turned up, seemingly spraying people at random as they fought against the crowd.

It was street warfare, and it was fairly even until the water cannons arrived, and pretty soon the public were on the run and the plaza was nearly recovered. As both the cannons and riot police drew closer and closer, Juan said to step aside and let the police charge past us after the crowd, as opposed to being gunned down by the water.

It didn’t seem like a bad idea, and the next they were running towards us, I instinctively raised my hands in some sort of arms in the air ‘I am harmless gringo please don’t hurt me’ pose. Juan looks at me incredulously, put your hands down he says and as we turn back to the oncoming police, I just hope the water cannon hasn’t spotted us.

A few of the police run past where we are taking shelter before one seems to take exception to us. I see him swing what I am still not sure is either a baton or just his fist, and I wait like a rabbit in the headlights expecting some sort of blow, but instead the can of beer I’m holding flys out of my hand, and they run on towards the fleeing crowd. I am left to mourn my spilt beer as I look at the crumpled can on the ground.. and it was a nearly full too, making it even more disappointing.

We shuffle to the side of the plaza and take refuge by some street food vendors, and as we munch away on some sort of meat, we can see the battle for the plaza still unfolding in front of us. The police look like they have it under control by this stage, as the water cannon patrols up and down menancingly, almost daring anyone to come back – though some minutes later and yet again parts of the crowd start working their way back on to the plaza, singing and chanting Chilean songs in defiance.

A bit more tooing and throwing continues until the police’s last offensive, where the water cannon charges the crowd once again in to a relatively narrow street of bars, but this time it doesn’t stop. We are back amongst the crowd, and everyone is sprinting down the street as the cannon follows. Bars are throwing their shutters up and people are diving in to any bar which hasn’t closed their doors. We make it in to one bar, a little wet and with the pulse racing… certainly an interesting experience, and it wasn’t even midnight yet!

Six hours or so later and I was back at a Chilean’s house, as he played guitar to a small group of us while plying us with some amazing tea. I was out of money and had none for taxi – it looked a very long walk, which I would have been happy to undertake as the sun would be rising shortly, but despite my rebuttals a Chilean girl completely detoured her taxi home to drop me off safe and sound – and I’d even beaten Juan home.

The aftermath the next day read that amongst other things, 500 buses had been damaged – a shame to write so much on the one incident as the city had really endeared itself to me in my relatively short stay here.

The beautiful Santa Lucia cerro (hill in the centre of town) gives some spectacular views over the city, and is a great place to take in the surroundings, including a look over to the snow covered Andes.

There was a welcoming friendliness to Santiago – and for a city of such a big population it had a very community like feel. Just a few minutes from Raul’s centrally based apartment was a real local looking bar where we actually watched England limp out of the world cup after 2 matches. On the upside he introduced me to a bizarre and yet tasty drink called a ‘Terremoto’. I have no idea what was in it, but the translation is Earthquake, and it certainly helped numb the pain of the England loss as I packed my bags for my next stop, a short bus ride to the street art capital of Chile – Valparaiso. 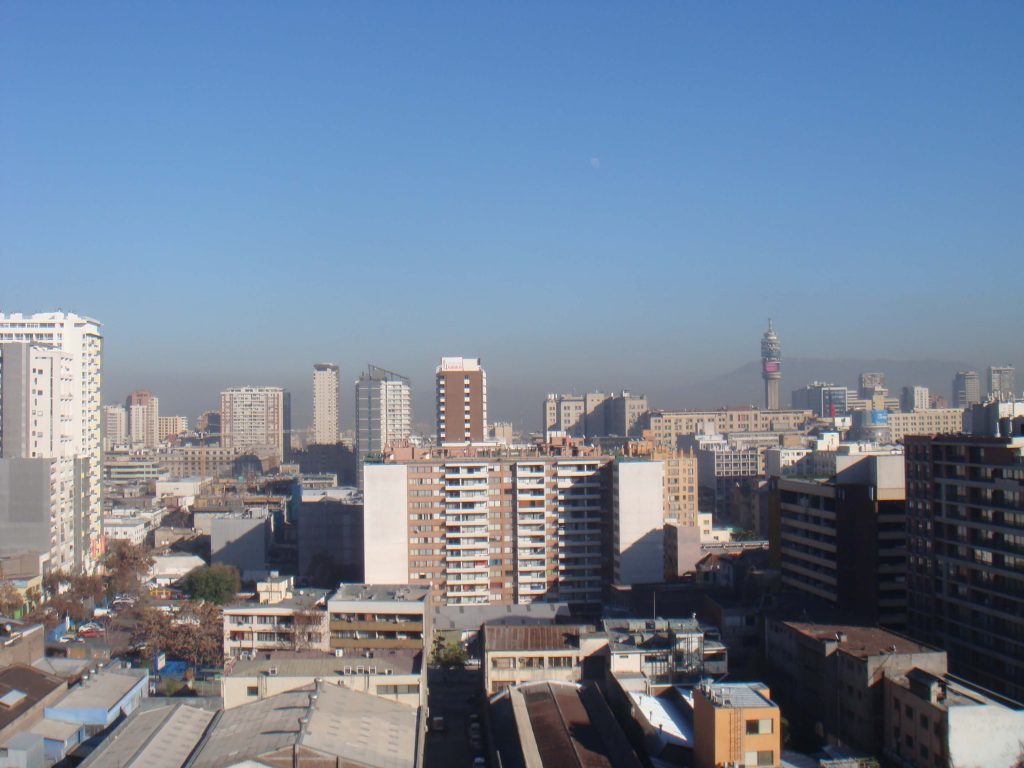 Some wild dog action (as would become usual in Chile) 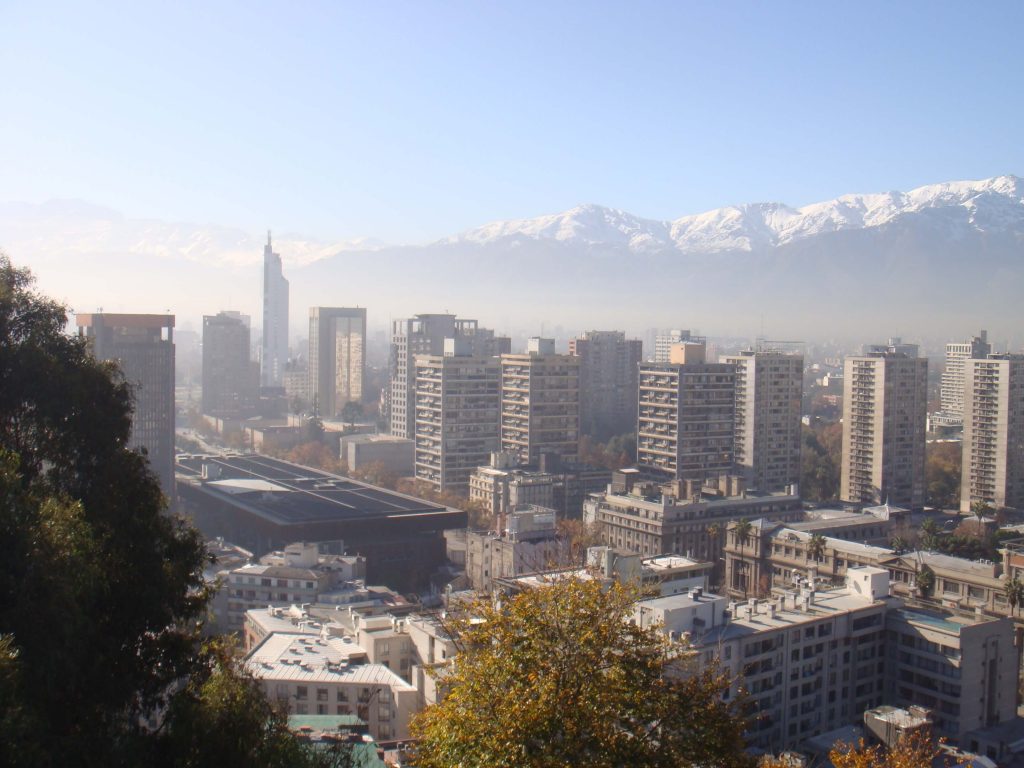 View over the city with the Andes in the background 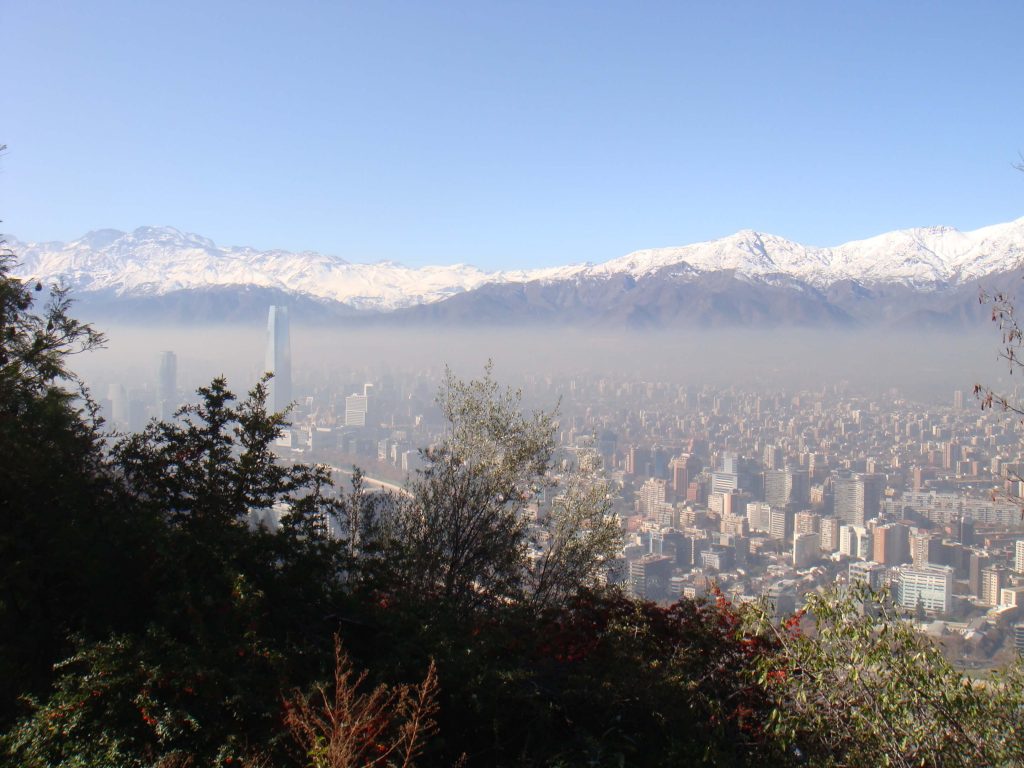 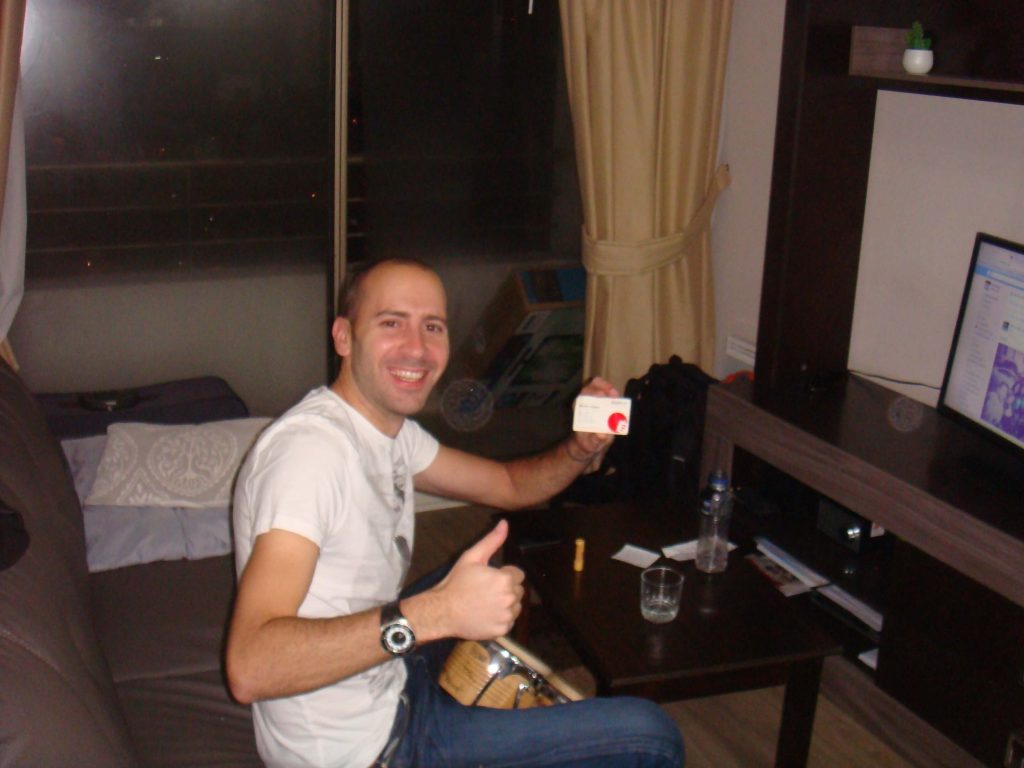 Raul with the BC