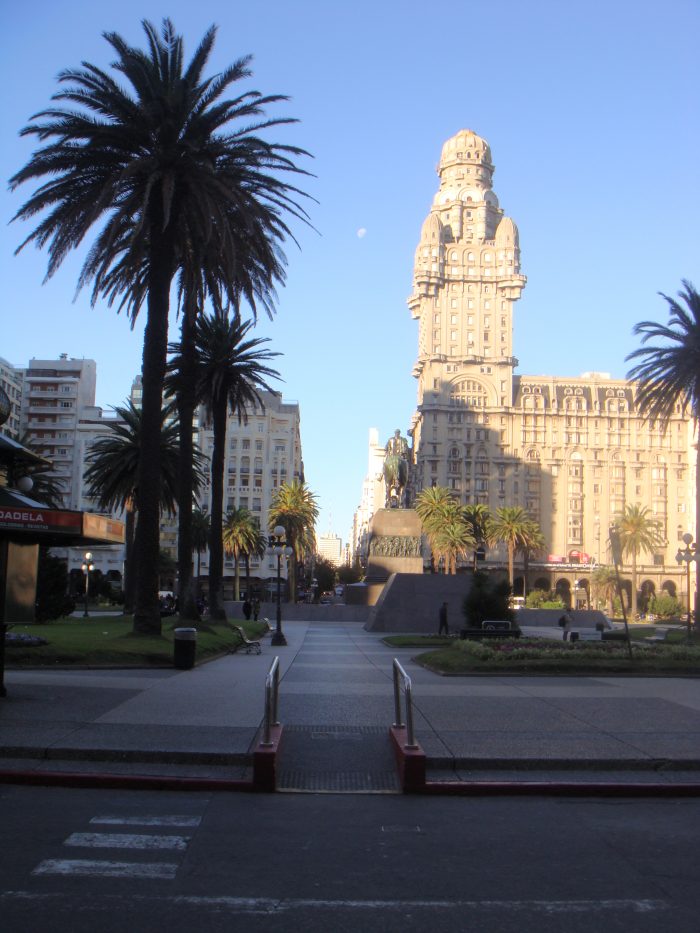 Having slept through my alarm, and not for the first time – it was with a mad cross city dash that I raced towards the ferry terminal that would hopefully take me to Uruguay.

I made it, but only just and on my arrival to the country I was greeted by the sleep old port town of Colonia. Charming in its quaintness and a welcome change from the hubbub of Buenos Aires, I took an instant liking to it.

For such a serene place so close to Argentinian capital  – just over an hour on the ferry – I couldn’t quite get my head around why the place was so empty. Granted, it was off season nearing the winter, but it didn’t strike me as being particularly expensive to scare tourists away, or any other reason that I could think of – the sort of place my parents would love, I remember thinking.

The only sign of life often existed in queues for Banks or cash machines – as Colonia is sometimes used by people trying to access money outside of Argentina, or to bring US dollars back in to the country on a currency run, often just as a day trip.

I didn’t know much about Uruguayan culture other then Luis Suarez, so it was perhaps surprising that I found it a very friendly and welcoming place. You shouldn’t base your idea of a country on one person, but I seriously did wander to myself how someone like Suarez could grow up in such a modest and friendly place? (Can you guess I don’t like Suarez?).

I spent a day in Colonia before moving on to the capital, Montevideo. Person after person helped me with directions whenever I looked a little lost, or was sneaking a look at a map – another welcome change from Buenos Aires. It had an almost eastern European feel about the city to me, even in the way in which the locals congregated in run down local bars on street corners – imposing and yet cosy looking.

While not being an ugly city, it isn’t beautiful in the true sense of the word either. I found a quirky and yet understated charm in the city and people. If Argentina was the suave, sophisticated know-it-all older sister, then Uruguay is certainly the unassuming, more interesting and affable younger sister – the girl next door type that you’d probably have a chance with.

Although I was falling for Uruguay, it was clear not everyone felt the same. In my first night checking in to the hostel, one of the guys in the room surprised me by commenting how dangerous Montevideo felt. He said the other night a couple of guys from the hostel had been mugged at gun point – from the way he was telling the story it felt a bit like hearsay, besides, everywhere is safe – until you get mugged. But to me, along with Buenos Aires, it really did feel like one of the safest places I’d been.

Being the winter, there were very few tourists around – including in the hostel I was staying at. I went out a couple of times on my own, striking up conversations with the locals – and was always met with great hospitality.

There isn’t a huge amount to sightsee as such in Montevideo, though it did boast one of my favourite squares in Latin America. I’m not sure I can quite put my finger on why I liked the Plaza Independencia so much – a little like how I found it a bit tricky afterwards to explain what I liked so much about Montevideo – just a particular atmosphere to it.

It was pretty nippy and the weather wasn’t amazing while I was there, but I tried to make the most of it. One day the rain came absolutely smashing down and with grey skies as far as the eye could see, it looked a bit of a write off. Resolving to get out of the hostel I jumped on to a random local bus, deciding to ride it to the end and then try to stay on it for the ride back – it might be raining but at least I’d see a bit of the city.

I asked a friendly looking local where she thought I should head on a bus, ‘Shopping?’ was her response. Hmm… not really I shrugged, though I was equally unable to think of anything to suggest. She gave me some advice at which direction would be good to head, and which to avoid – and so I made my way to the bus stop.

I decided to get on the bus which the majority of waiting people were going to take, and fortunately I didn’t have to wait long before jumping on to one. The driver enquired where I was going, to which I told him I didn’t know.  He looked completely dumbfounded, which I guess isn’t entirely surprising.

I tried to explain that I just wanted to ride on the bus to the end and then back to the city. ‘Shopping??’ He asked, no- not shopping, is this the only thing to do on a rainy Saturday?! His bafflement turned to hilarity when he understood I was just riding around with no plan, and no idea where I was heading – probably because he knew where I was getting dropped off. He looked at me like a harmless but crazy person given a day out of the asylum and chuckled a friendly laugh as I sat down.

After the first ten minutes I was hit by a wave of tiredness, and I was struggling to keep my eyes open as we drifted further and further from the centre of Montevideo and eventually out of the city itself. As we progressed, the houses became increasingly sparse and far worse built, with horses starting to replace cars – and it was around an hour or so before we got to our last stop and everyone hopped off.

It was still pouring outside, and I am hoping that if I just sit on the bus it will take me all the way back, but the bus man explains this is the end, I must get off. Shit. This was the sort of place you would only reach by jumping on a random bus. Out in the sticks, a shady looking pub in the distance, a shop with steel shutters all over the windows and a rundown church are among the initial highlights.

This is not a place for visitors. The bus man laughs again, asking what it is I want to do – which is a difficult question when you aren’t even sure yourself,  so I ask him how I get back to the centre? ‘Shopping?’ he asks again, no.. just the centre please!  He shows me to a bus stop and points at a waiting bus, and has a chat with the bus driver – both of them having a good laugh, most probably at my expense but it all seems friendly enough.

It will leave soon he says, and I am left to wait around in the bus stop as he shakes my hand amicably and waves goodbye. Five minutes later the other bus starts up and I jump on. ‘Shopping? The centre?’ He asks as I enter. Why does everyone in Uruguay want me to go shopping?? – I’ve given up fighting it and just tell him yes…shopping, as I jump on.

The warmth of the bus, and knowing that I am hopefully on my way back to the centre comforts me until at one stop he motions for me to get off. It feels like we have only covered half the distance, but he shouts again ‘Shopping!’. I reluctantly leave the bus, feeling compelled to follow my destiny to go ‘shopping’ and find myself in a large out of town mall -and I have never seen one so busy in my life.

Think Xmas eve back in England, ridiculous amounts of people, mainly teenagers with no intention of buying anything but nothing better to do.  I walk around being carried by the crowd, until after about half an hour enough was enough, I don’t even like shopping – and managed to find a bus back to the centre amongst the omnipresent pouring rain.

I was fortunate to get one really sunny day in Montevideo before I left, and although it was still pretty cold I grabbed a bike from the hostel and took to the beach side promenade. I was rewarded with a smooth and picturesque trail made especially for bikers and runners which stretches for well over 20km alongside the vast beaches of Montevideo. I had been going for a couple of hours, casually making my way along the coastline and contemplating how bustling and vibrant this whole waterfront would be in the summer.

On the ferry on the way back to Buenos Aires I can’t help but think Uruguay will be far better known as a tourist destination in 5 or 10 years time. During my time there I kept pondering why more travellers weren’t here, or why it is not better known – at least to us Europeans.
I’m not complaining too much though, as while it remains an understated charm – at least in the winter – it is the perfect place for a travel-wanker like me who prefers to be where most tourists aren’t. 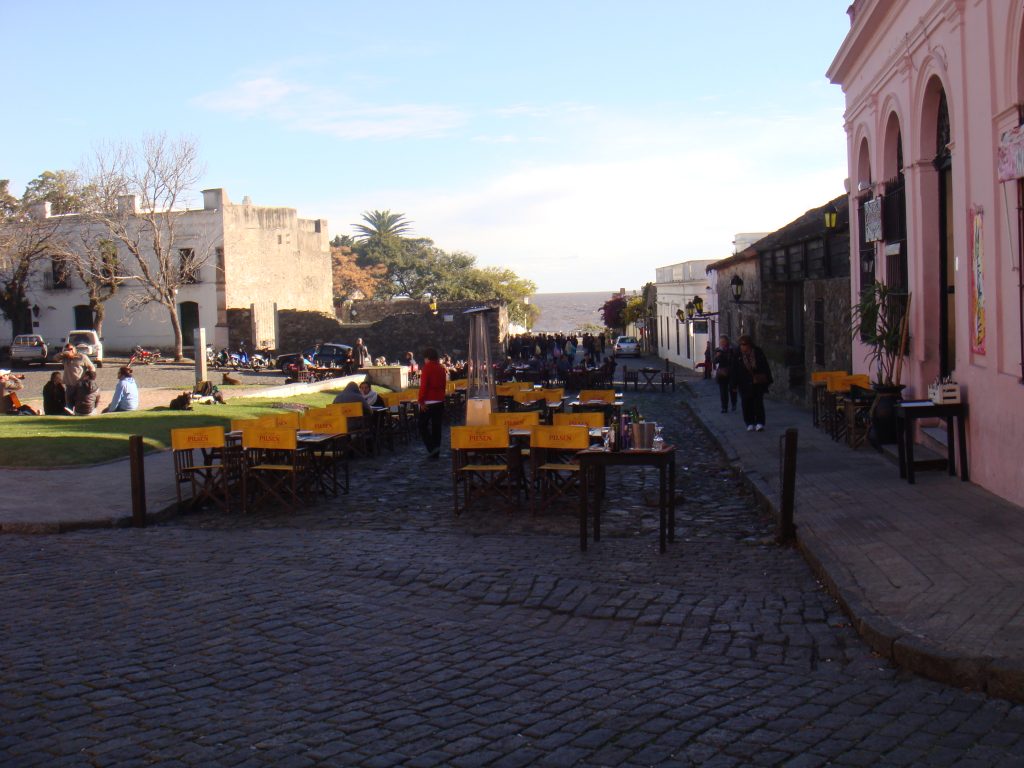 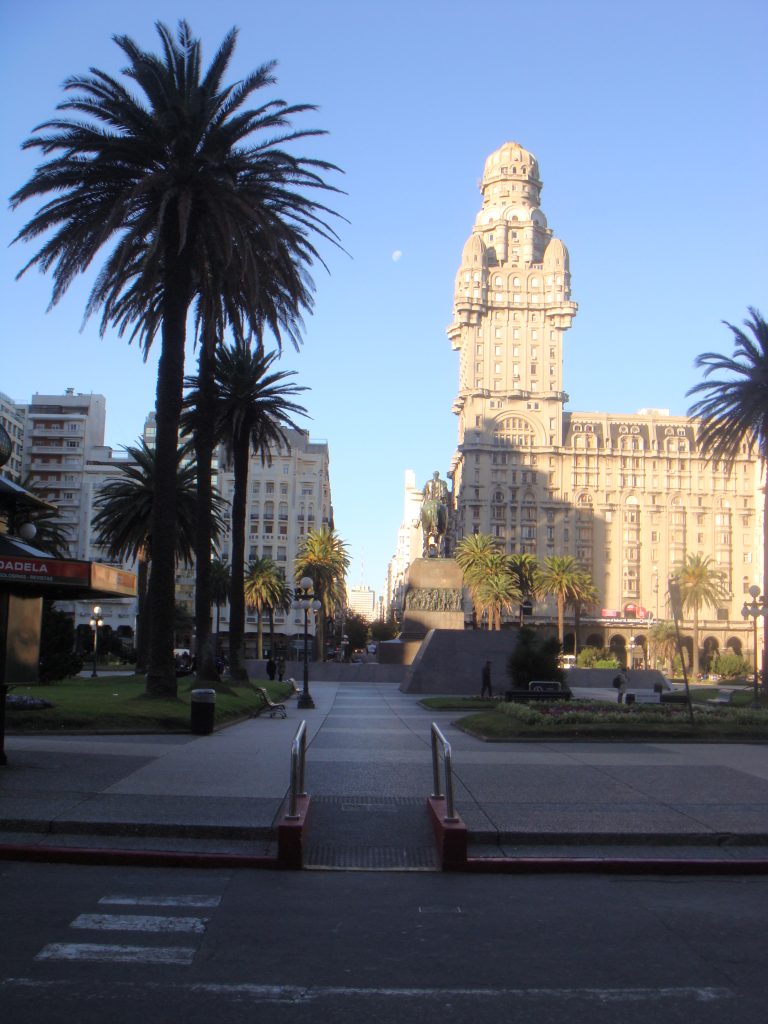 Montevideo, Plaza de Independencia had a special place in my heart for some reason 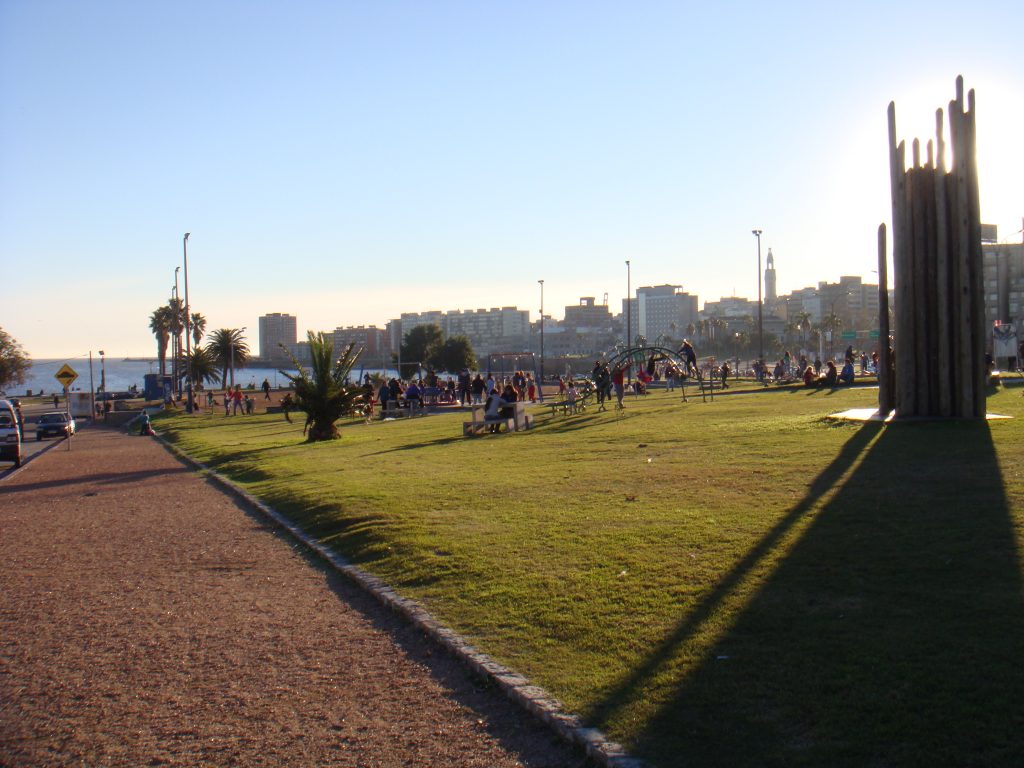 Locals flocking to the parks on a Sunday 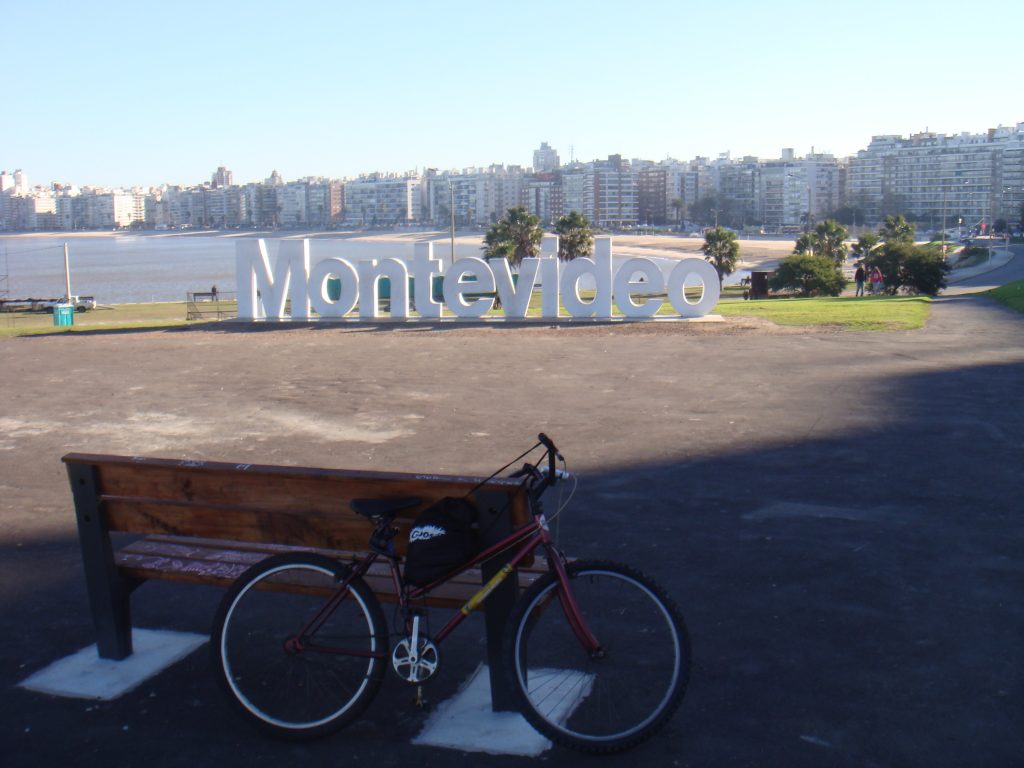 Rental bike for the day, taking it for a spin along the coast 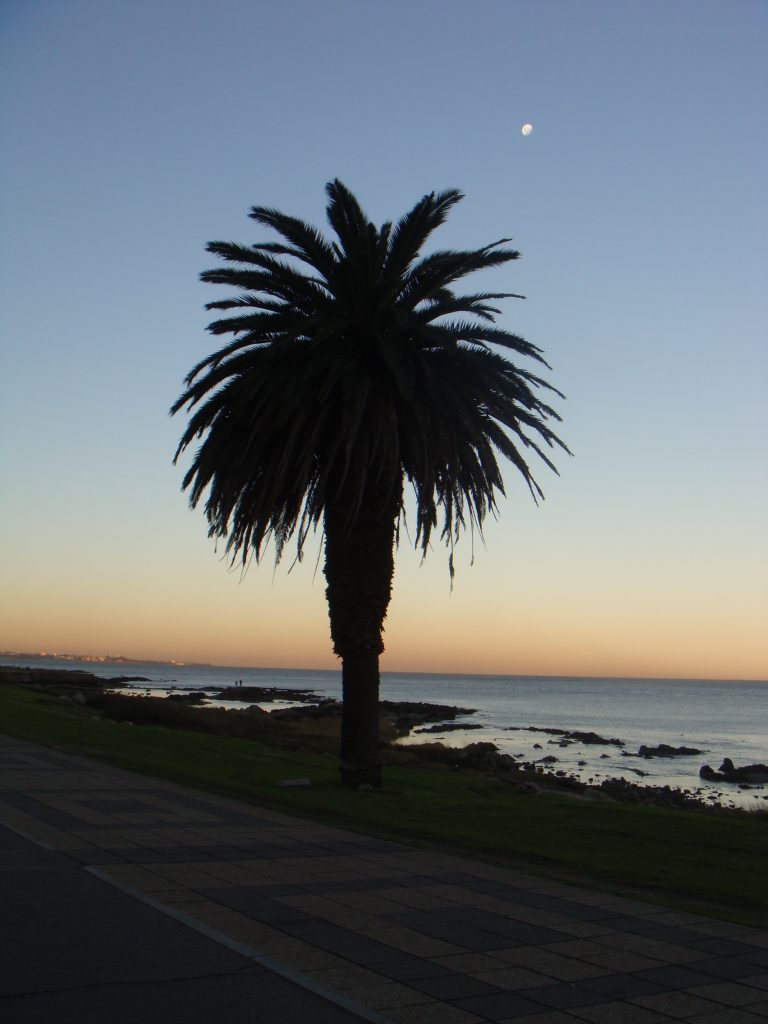 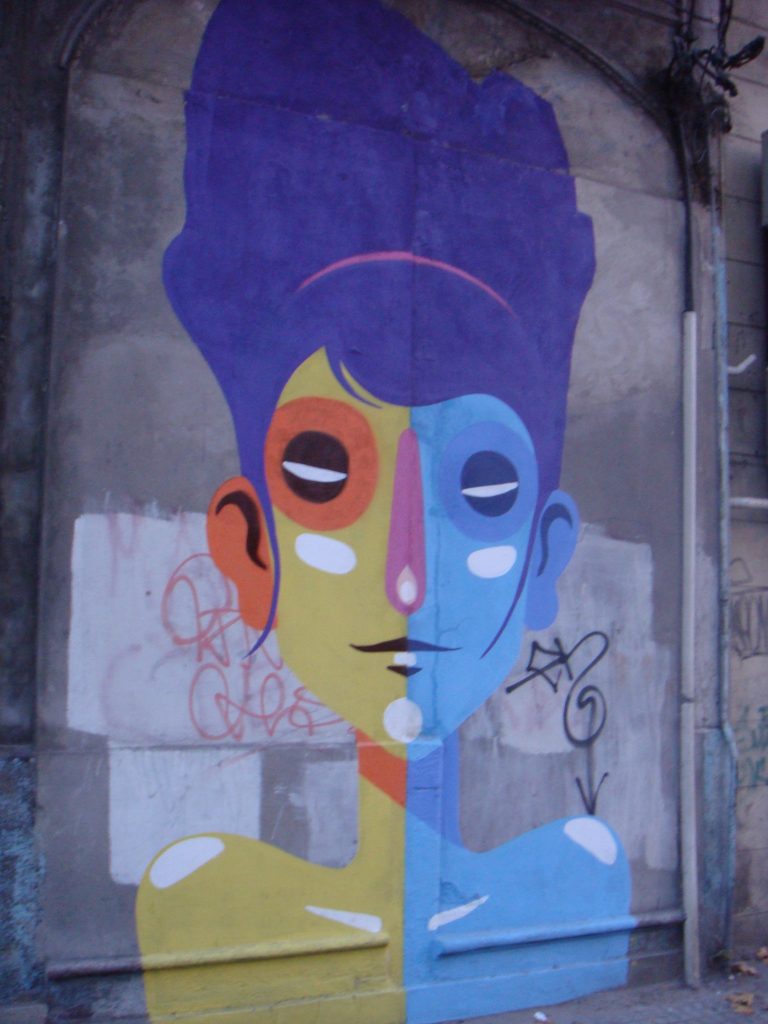