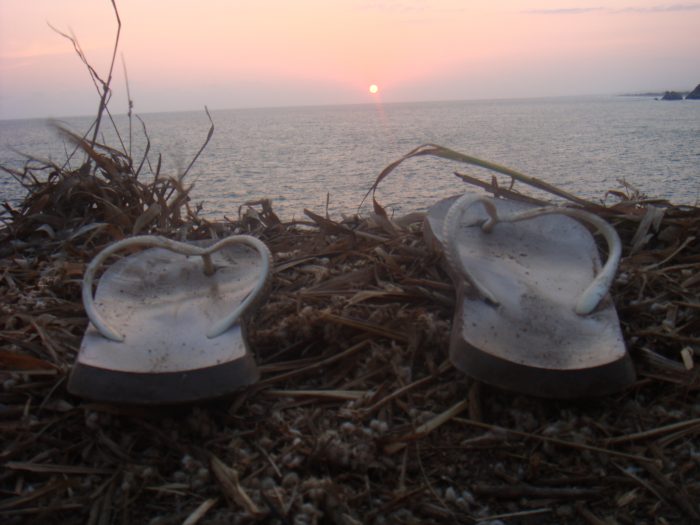 Heads I go to Puerto Escondido, tails I head straight to Mazunte…

Heads it is, or the Mexican equivalent which I think is an Eagle.

A good friend of mine had told me not to bother with Puerto Escondido, unless I hadn’t had enough of Aussie surfers. Oh Kat how I should have listened…

One hour after flipping the coin and I am on a shuttle bus destined for Puerto, having quickly booked a hostel that I vaguely recollected was recommended to me (more on that later).

I would usually only book two nights in a hostel, in case I don’t like it for whatever reason, but as I sat there, about to confirm my booking, I turned to the girl next to me and asked ‘2 or 3’, ‘errrmm.. 3’. 3 Nights it is then!

One of the most enjoyable bits of Puerto Escondido was actually the shuttle there. I’d heard and read of some suspect stories about near misses, sheer drops and escaping death but it was pretty tame compared to what I was expecting.

5 hours or so later I arrive and find my hostel located down a side alley of a street. I seem to usually tell if I am going to like a hostel almost instantly, and as soon as I stepped through the door, I just didn’t feel comfortable.

There was a couple of guys just lying around, seemingly doing nothing with their tops off – usually a bad sign, normally meaning a long termer who has absolutely no interest in you at all, and has stayed there long enough that they feel like they own the place.

I try to say hello to a few people, but nobody really gives a shit. I make my way over to what looks like the reception and say hello to an attractive blonde girl. She laughs when I tell her I have booking and says she is only using the computer, and someone will be over soon. So I grab a seat and wait, maybe 10 or 15 minutes, until eventually a fat American woman, probably close to her 40s came and checked me in.

I paid for my three nights and had a quick tour around the place. The hostel itself isnt actually a bad place, it has a swimming pool, some hammocks and a built-in bar but as I was seemingly the only non long termer, it felt like I was attending a friends uncles birthday, but my friend had gone home and left me an entire family I knew nothing about.

The worst thing was that I’d booked 3 days. The owner, an overweight ignorant English man, who spoke no Spanish despite owning the hostel, saw me and shouted ‘oh so you’re the English guy?’. I tell him yes, and try to start some conversation.

I will mate, I’ll remember you for being a prick.

The next day I’m told its Sugar’s birthday. (There is a guy called Sugar? course there is). I have a wander around during the day, but other than a few average beaches, there really isn’t much to write home about. The place seems pretty empty, the town itself is very forgettable, it seems the only drawing factor are the huge waves that roll in.

Luckily when I return to the hostel another newbie has arrived – a German guy, and although his English is pretty sketchy, we bond over a mutual newness, and as he was fluent in Spanish, gave me a great chance to practice some of it out. Of about the 12 or so people who were the long termers in the hostel, about 8 or 9 of them said they worked there. I couldn’t for the life of me work out what they were actually doing, the place could be run by one person, and most of them had been there for months, and declared that they didn’t want to leave.

When I tried to make conversation about how there day was or what they had been up to, not once had they left the hostel or actually done anything. I just couldn’t work it out, why the hell were they so content in staying here?

The German guy had only booked 1 night, and he said it was a tactic he had employed everywhere, for this very circumstance, and said he was definitely leaving the next morning. I went with him the next day when he checked in to his other hostel, and pangs of jealousy swept by as we entered an immediately more friendly hostel, right on the beach. I still had 1 more night that I’d paid for, but I was tempted to do a runner regardless.

I did indeed stay for my final night, and listening to the loud cackle constantly frothing from the fat middle aged American woman, I considered not bothering to visit Mazunte at all. It was a borderline call, and I was tempted with another coin toss, but as I received a message from the two Aussie lads who I met in Oaxaca saying it was a cool place, and a recommendation of where to stay, I headed down there next morning.

With hostels, and I guess travelling in general, you win some and you lose some. As soon as I got to Mazunte, the vibe was entirely different – a bohemian tranquility emanated around the place. People looked friendly again, smiling in the street and saying hello, as I made my way down to the recommended hostel.

The receptionist told me to take a look upstairs to check out the rooms and see which one I’d like, so I wandered up some stairs and came across the ‘Estrella’ section. I actually couldn’t believe my eyes, like Moses in the desert when he’d finally found a SubWay.

Overlooking a small cliff, there were around 10 beds hanging from ropes, each with their own mattress and mosquito net. If this was in Europe it would be classed as a top of the range Eco Tourism Hotel or some bourgeoisie-esque shit. Here it was five quid a night, with a view of the beach from my bed. Absolutely outrageous. The comparisons between the two places couldn’t have been more polarized, the highs and lows of travelling.

It was an awesome few days in Mazunte, and included one of my favourite spots in all of Mexico – informally dubbed the Jacuzzi pool. A 15 or 20 minute walk to a natural small inlet, which due to the tidal current creates a pool, sheltered by high cliff walls all around and usually usually empty of any people. With just enough danger to keep you entertained, but while at the same time relaxed, as the waves drag you in and out of the entrance.

The Aussie boys were going south to Guatemala to study in a language school for a week. It was about $160 for 1 week of class, 5 hours a week Mon – Fri, with 7 days of home stay with a family including all meals etc. It sounded interesting and a great way to improve my Spanish, so I decided to sign up. I didn’t expect to go to Guatemala, as I had already planned to fly from Cancun to Cuba, but I thought when in Rome, sign up to a Spanish school.

(Post note: I later met up with the Irish friend who I thought had recommended me the hostel, he laughed when I told him I stayed there ‘I said that was a hostel to definitely NOT stay at’. His story was perhaps more funny then mine. He arrived with 4 girls, and as the fat english owner said hello, he asked the girls where they were from. When my friend went to reply he said ‘never mind about you mate’ as he shouted to the other guys in the hostel ‘ hey lads, we’ve got 4 girls here for you to get in to’.) 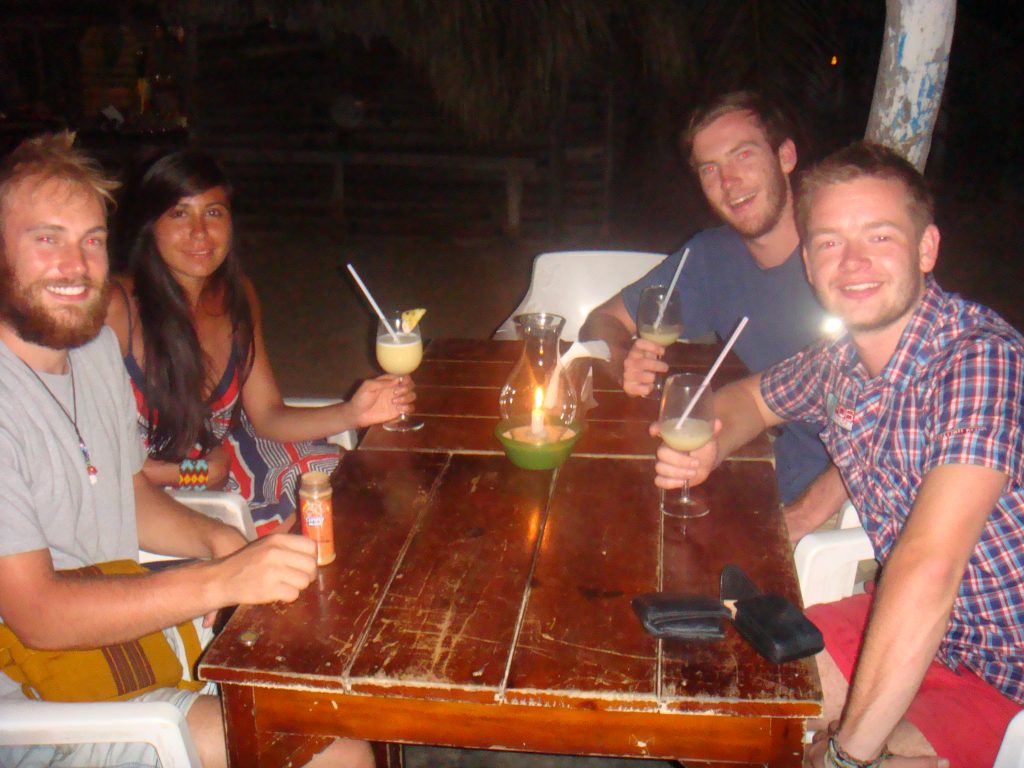 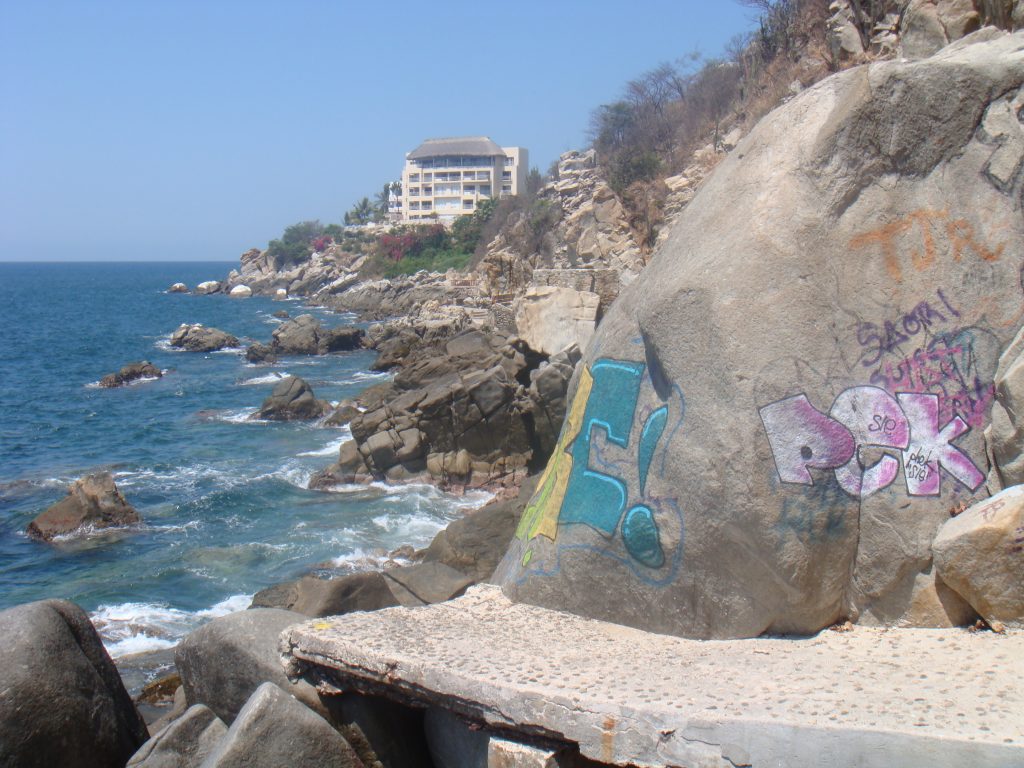 Puerto Escondido – A walk along the rocks 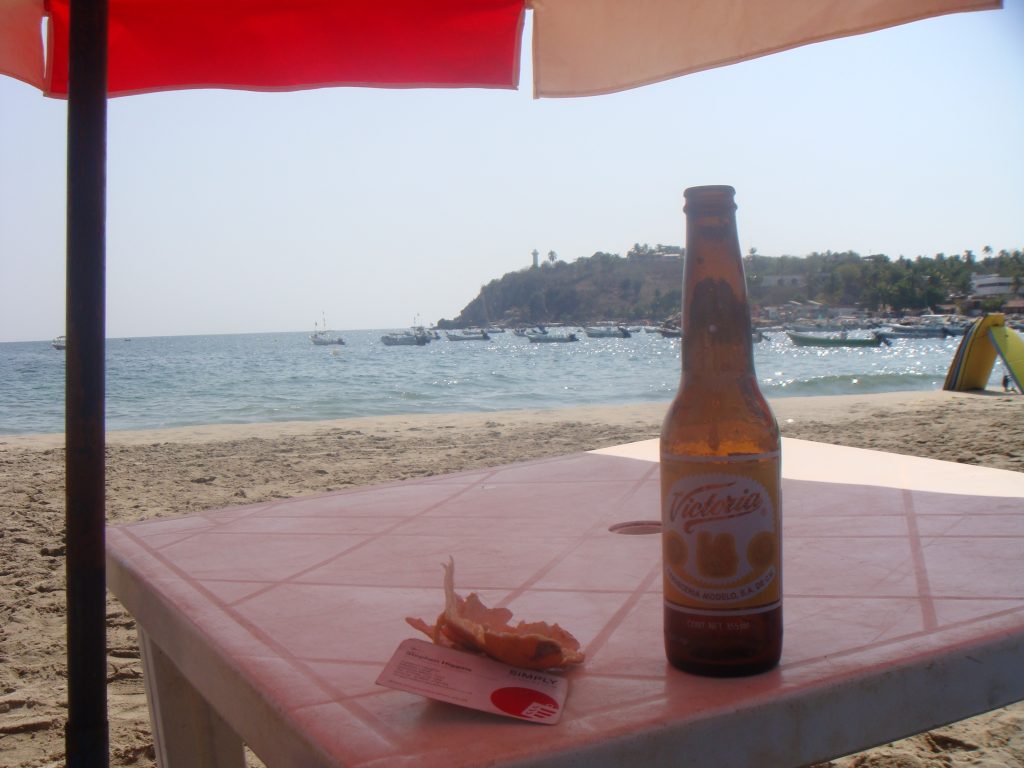 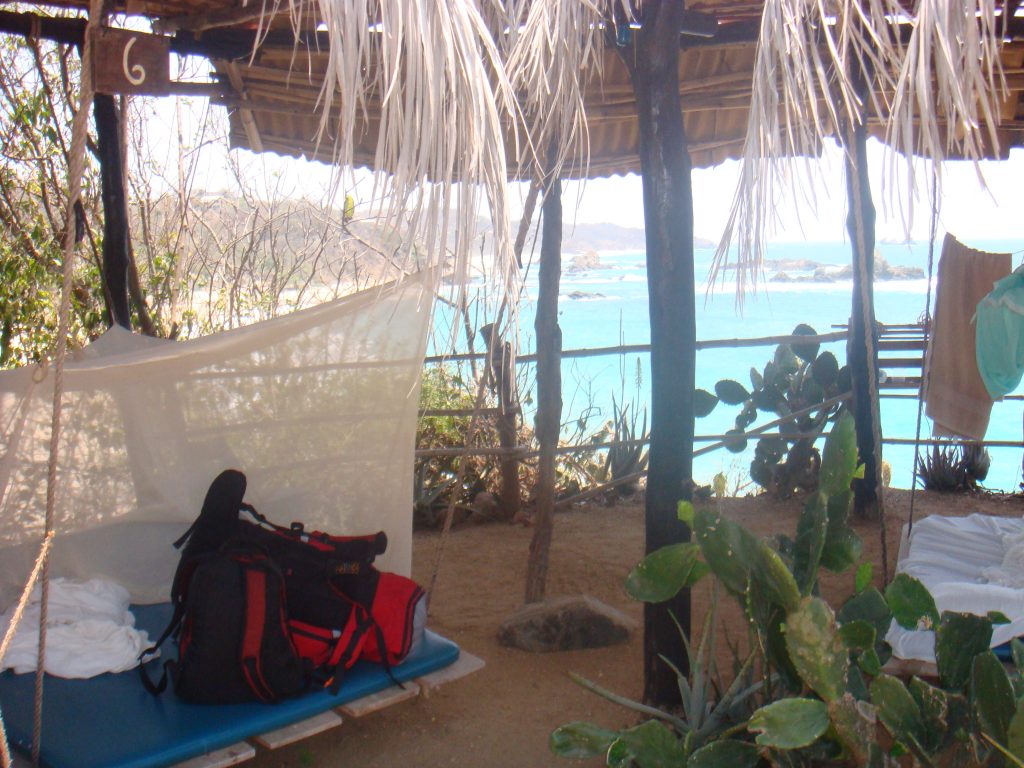 Mazunte – Hanging bed overlooking the sea. Not a bad place to spend the night for a fiver! 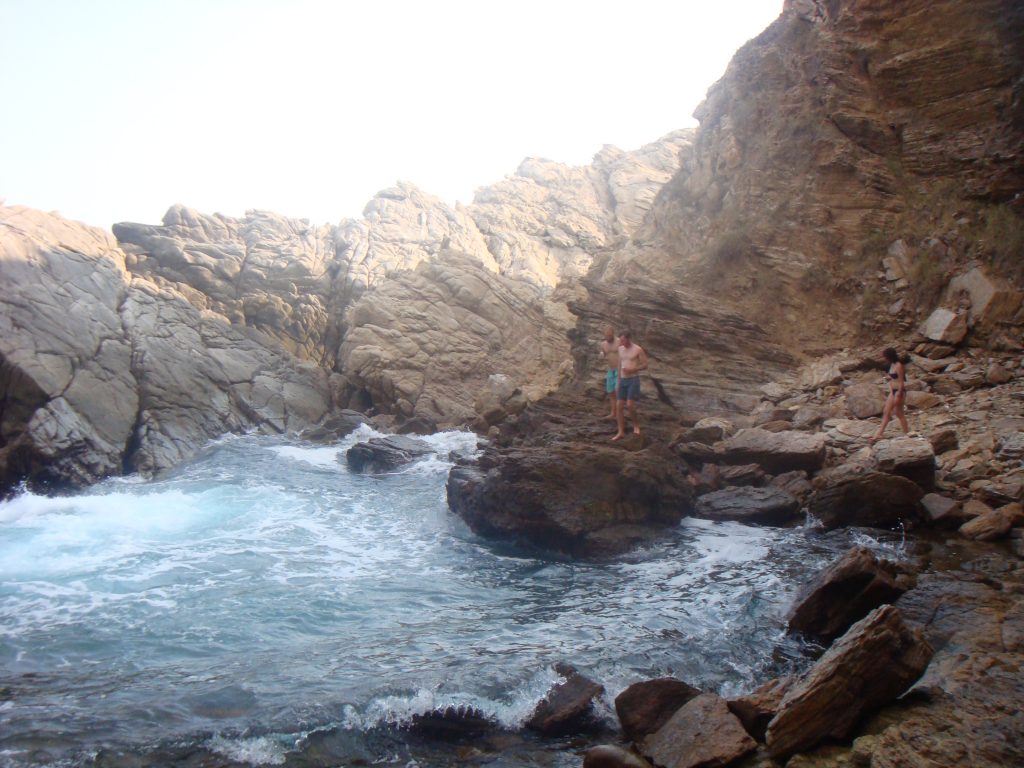 One of my favourite places in Mexico. The natural jacuzzi pool near Mazunte 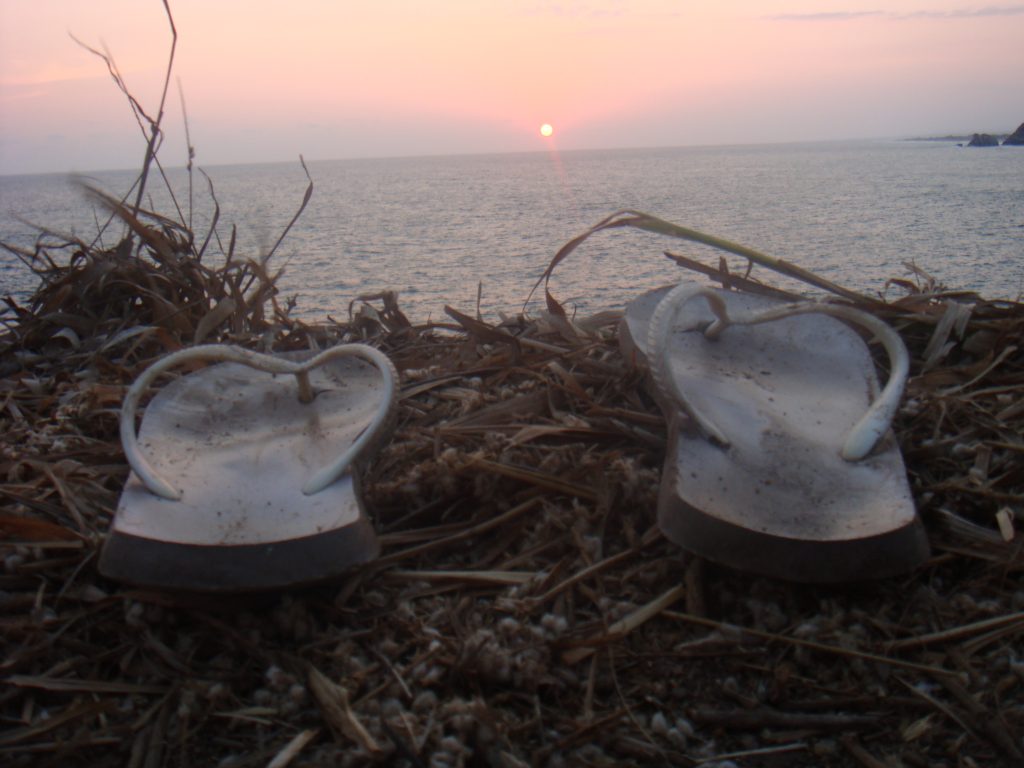 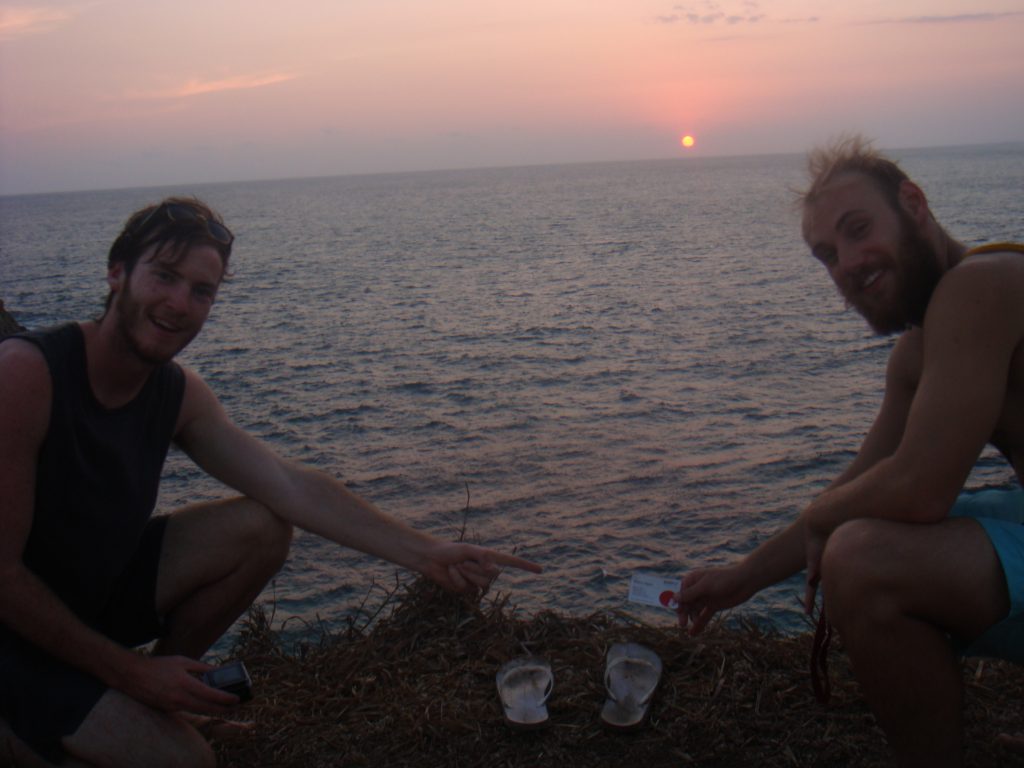 Another flip flop sunset with the Aussie boys Dan and Pat 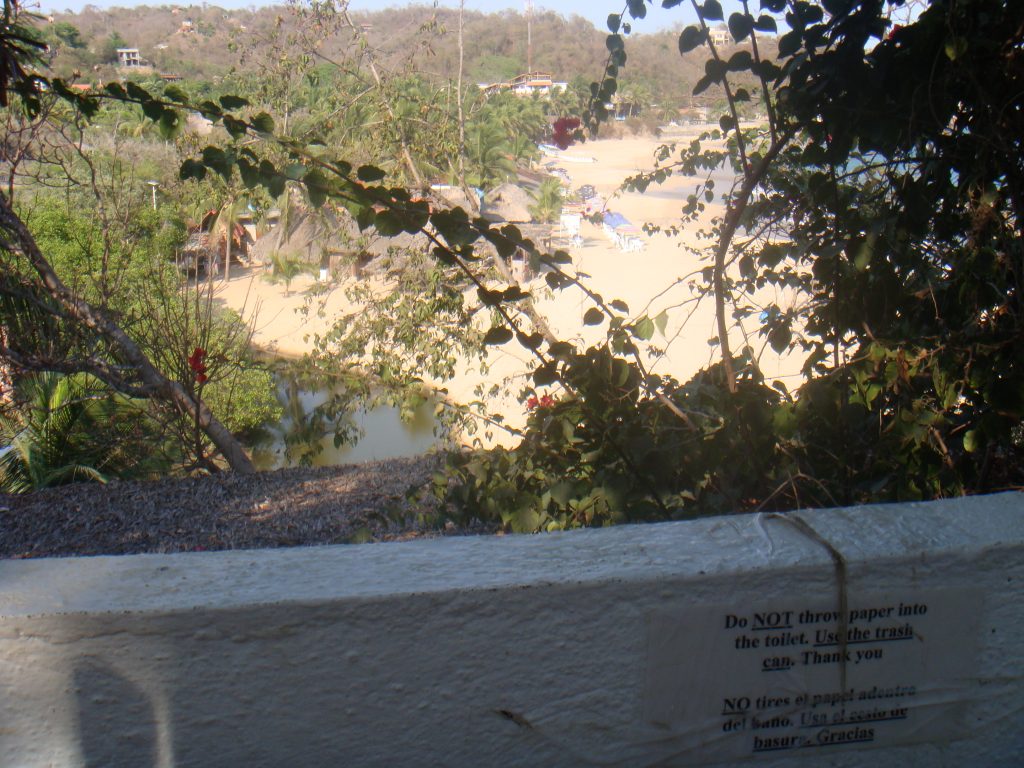 Mazunte – The actual view from sitting down on the toilet