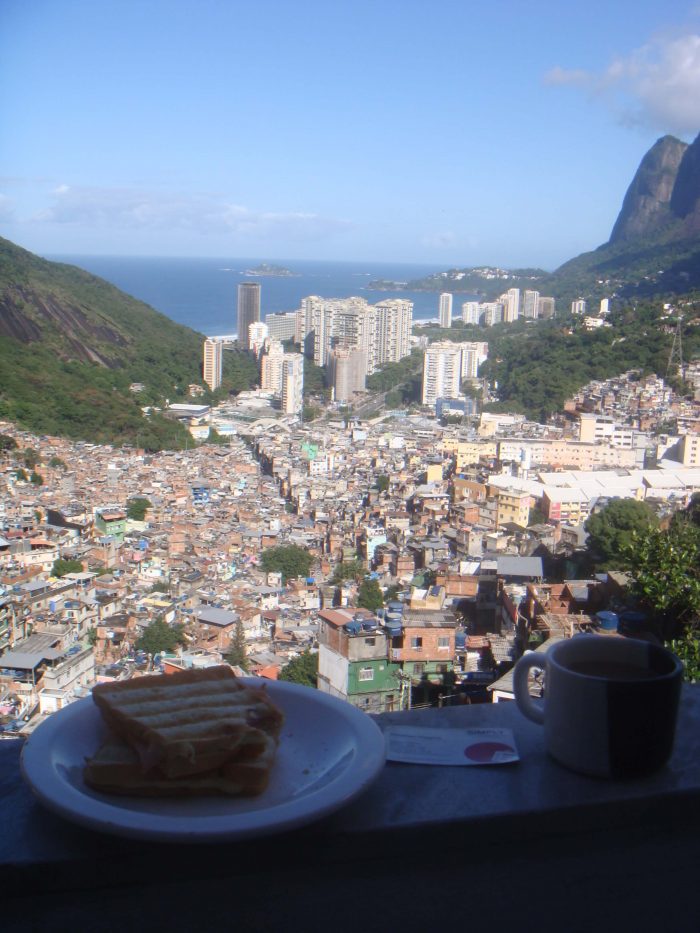 I instantly fell in love with Favela life, the atmosphere and friendliness like nothing I expected. The constant sound of hustle and bustle, motorbikes and above all – always some sort of music echoing throughout the bustling streets.

The day I arrived was te 3rd place play-off match – which was Brazil against Holland, and after meeting a fellow Brit Callum at the guesthouse, we jumped on a motortaxi and sped down towards Copacabana beach to catch it on the big screens.

Compared with the first motortaxi taking me to the top of the Favela and the numerous nearly slips off the back, I could almost enjoy this trip as we raced and sped through the traffic. It’s hard not to feel really alive as you hold on for life, sweating profusely and willing no cars to make any sudden moves.

It would take a couple more journeys until I was used to the motortaxis, but for now we reached Copacabana and full of adrenaline we jumped off and into the huge crowd, sparkling with different colours, fancy dress and nationalities.

The thought hit me nearly straight away ‘what have I been missing?!’. Not usually one for crowds, this was different – no feeling of aggressiveness or tension, just people of all nationalities and costumes, sprawled along beautiful beaches and just enjoying life.

It was a carnival atmosphere (whey) , and even as Brazil slumped to a loss, nobody seemed too upset – the only blip with the crowd being some large groups of Argies trying to poke their noses in the Brazilians loss. After the match we meandered up and down Copacabana, as became a standard pastime.

Buying combinations of beers and caipirinhas and talking crap to everyone and anyone, with the Brazilian girls particularly happy to try out their English. It was a great warm up for tomorrow and what would be one of the biggest days of my whole trip, the world cup final, so we decided to head back on the early side in preparation.

In the re-entry to the favela that night, it was absolutely thriving at the foot of the huge mountain it winded its way up. People were sprawling about everywhere, music fighting each other for loudness, there was no shortage of life – how do people ever sleep here I wondered, as we jumped on the motortaxis back to the top of the Favela, grinning like an idiot.

The morning breaks, and its world cup day – and to top it off it is a stunning day in Rio. I grab a coffee and cheese toastie and wait for Callum to wake up, soaking up the sun and the early morning sounds of the favela, from a simply captivating view.

Feeling increasingly confident/daring/stupid with favela life , we headed towards the more dangerous area of the favela, a place I’d heard a few people refer to as ‘The Badlands’. As we headed further from the guesthouse, winding our way down the favela steps, it started to look increasingly sketchy as my heart started to beat faster.

Before long we were more in to the sort of place I had imagined a favela to be like – I mentioned to Callum this wouldn’t be a bad place to die, as we both laughed a bit nervously. We were getting increasingly strange looks, some were friendly while others not quite so much. A few of the locals clearly looked either on hard drugs, or in the grip of an addiction – did we even know how to get back? Adrenaline was surging through me as we kept walking.

And then a strange thing happened – a woman shouted to us from a window in English, asking what were we doing. Completely startled we looked up – I hadn’t heard any English in the Favela outside of the guesthouse – let alone in this part, and we got talking to a Brazilian woman called Luna, who had clearly had a fascinating life.

An ex-husband and children living in Switzerland, she was now back in the Favela and had been in to various drugs in the past. Her vivaciousness completely charmed us, as she engaged us with her wild, friendly and at times irrational behaviour. She pointed out various people as they walked by, and made us feel more at ease.

We were offered a smell of whatever it was inside these plastic bottles we kept seeing, and we politely declined. After some more time talking to Luna we decided to head back – and I managed to sneak a picture of her after asking her permission. It was a hell of an experience, and gave us a different, if a little unnerving perspective of the Favela.

As we found our way back to the main Favela road we jumped on the motortaxis back down to Copacabana to take in the pre-match atmosphere. The beach was clearly divided in to Argentines and everyone else, who all seemed to be supporting Germany. We decided to be German for the day, and saw some Brazilian girls painting German flags on faces, which would do just the trick. After that we bumped in to a guy selling a nice fake of a German kit, complete with Podolski on the back for about a tenner –even better!

It was a no brainer really – and we both grabbed one. The Argies were in full swing by now, and were certainly not making many friends from what we could see. As the day progressed and the beers and Caipirinhas were flowing, we became progressively rowdier, with chants such as ‘Deutschland till I die’ and other such adopted English classics.

We found a pocket of German fans surrounded by Argies, who really were there in some numbers, positioned nicely by one of the huge screens. We watched a nervous first half from here, and I say watched – it was a constant battle of trying to see through people’s heads, weaving your head left and right, until for a second you catch a glimpse of Mario Gotze taking a throw in.

A half time slash was needed, and as we tried to make our way down to the beach, the Argies nudged and jeered as we tried to pass through. Some tried to push or kick us, and for a second it looked like it was going to turn ugly. We managed to get out for the half time slash(Mourinho), but there was no chance of getting back to our German supporters club in the sea of Argentinians and we caught the rest of the game further back and to the side.

As the game entered extra time you could feel the tension rising, particularly with the Argies. I didn’t really see the goal as German fans erupted when Gotze found the back of the net, and there was an unnerving wait until the final whistle, at which time I expected full blown chaos.

It didn’t quite happen, but there were a few scuffles and a gun shot, which I think was a warning shot from police, but far less aggressive as the Argies took to mourning rather than fighting. We walked around and took in the atmosphere around Copacabana, which was a strange sort of subduedness. The hordes of Argies looked completely despondent, sitting around like they had just lost their entire family in a freak bowling accident, while the Germans in their minority celebrated in a muted way.

During the course of the night I switched my fake Podolski shirt to a decent fake of a Colombian top, until finally a real Boca shirt. The Argies came back to life some hours later, still swarming the streets, this time singing their well recognisable songs and jumping around, something akin to a rowdy wake at a funeral – tears and embraces of what could have been.

As we bounced around and sang, I almost felt sorry for them with their passion all too evident to see. They were still chanting away down by the beach, where most of them were sleeping for the night, well after we headed back to the Favela.

For my final 4 or 5 days in Rio I decided to continue staying in the Rocinha Favela, which had been such a surprising highlight of my trip. One of the days I attempted to go up to the Christ redeemer, but seeing the post-world cup crowds I gave up. Luckily, one of the family sons from guesthouse tipped us off on a lesser known place called the ‘two brothers’.

After a combination of collectivo bus and walking, we reached the top of the neighbouring favela and began the trek. I had heard the view was one of the best in Rio, and wow, it was probably the best view of my life. We must have spent 2 hours at the top with around 20 to 30 other people coming and going.

In the distance you could make out Christ the Redeemer, the Sugarloaf Mountain and also a view of Copacabana beach, with the favelas sprawled out over the mountains. It is hard to really put it in to words, but it felt like the pinnacle of the whole trip. Rio simply has to be the best city I had ever visited – I’d heard all the hype and not quite believed it, but I’m not sure anything else can really compare.

The next few days were spent relaxing, often riding on a motortaxi down to Copacabana to stroll along the beach, casually drinking cold beers and caipirinhas while trying not to stare so obviously at the unfairly attractive girls, playing beach football (terribly) and nearly being swept out to sea on a number of occasions from the ridiculously big Copa waves.

There was also one of most enjoyable football games, as we stumbled upon a court with some Brazilian kids playing. Before long our mix team of Mexicans, Belgium and English showed the local kids that although they clearly had the skill, our counter attacking direct one-two football was too much to contain. On our wander back from football we walked through a neighbourhood with amazing murals lining the streets as we stumbled upon a house with a barbeque outside. We grabbed a BBQ’d sausage and were invited up on to the roof and drank a cold beer, as we looked out over that area of the city.

I didn’t want to pull myself away from Rio, and the extra days I stayed meant I didn’t have any time for Sao Paolo, where I was flying home from. On my last day I exited the favela just as I had entered, on a motortaxi – only this time I wasn’t quite hanging on for life. It was quite an emotional journey, as we wound down the hill, the favela bursting with life as usual, as I said my goodbyes to a place that had felt like home for the last 10 days or so.

Money had been extremely tight for the last few days in Rio, so I hadn’t explored much of the nightlife, and barely had enough to pay for food the last few days and the bus to Sao Paolo. Spending the last of my Brazilian REAL, I bought enough snacks to get me through my long wait till the flight.

For me, five and a half months felt a long time to be travelling solo, and perhaps a little too long – my energy levels had been depleting rapidly in the last couple of months, so it was with a feeling of acceptance of the end, that I waited patiently at the airport. My money was gone, along with my travel journal, but Latin America had completely won over my heart. The experience, to put it philosophically, was fucking awesome. 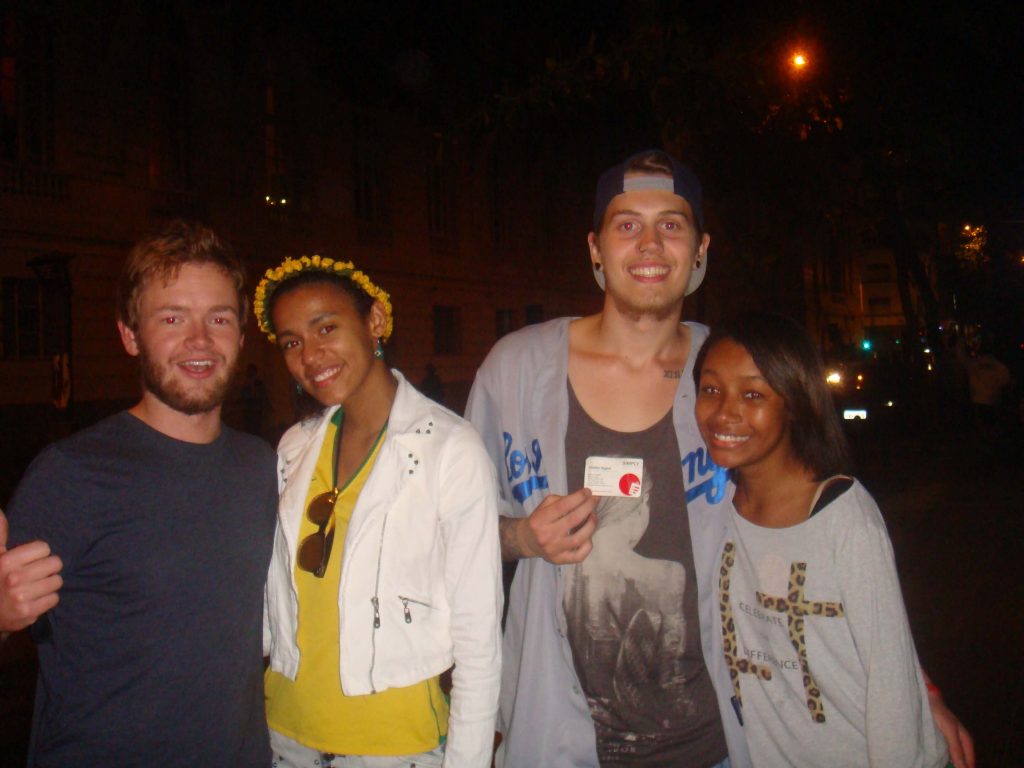 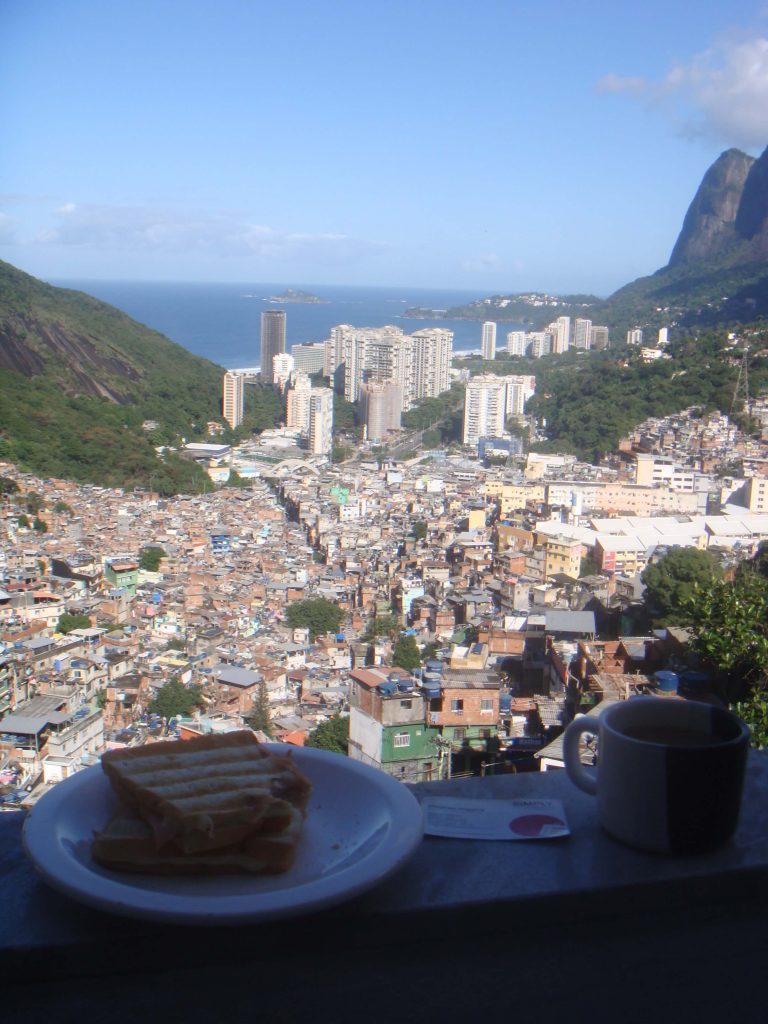 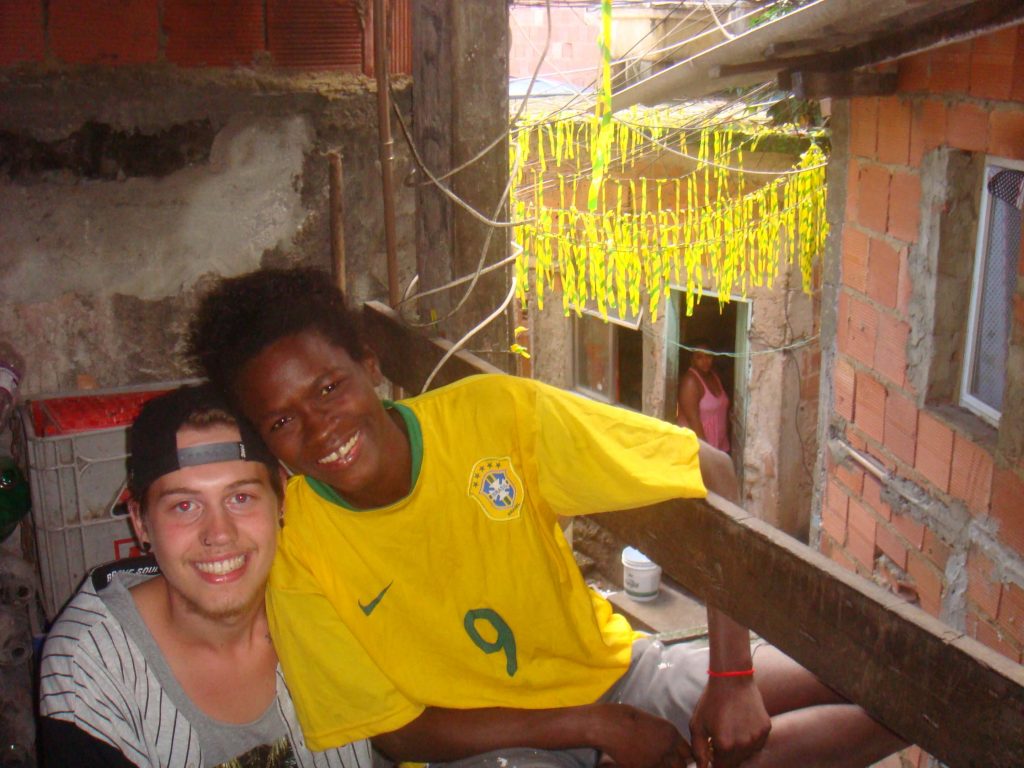 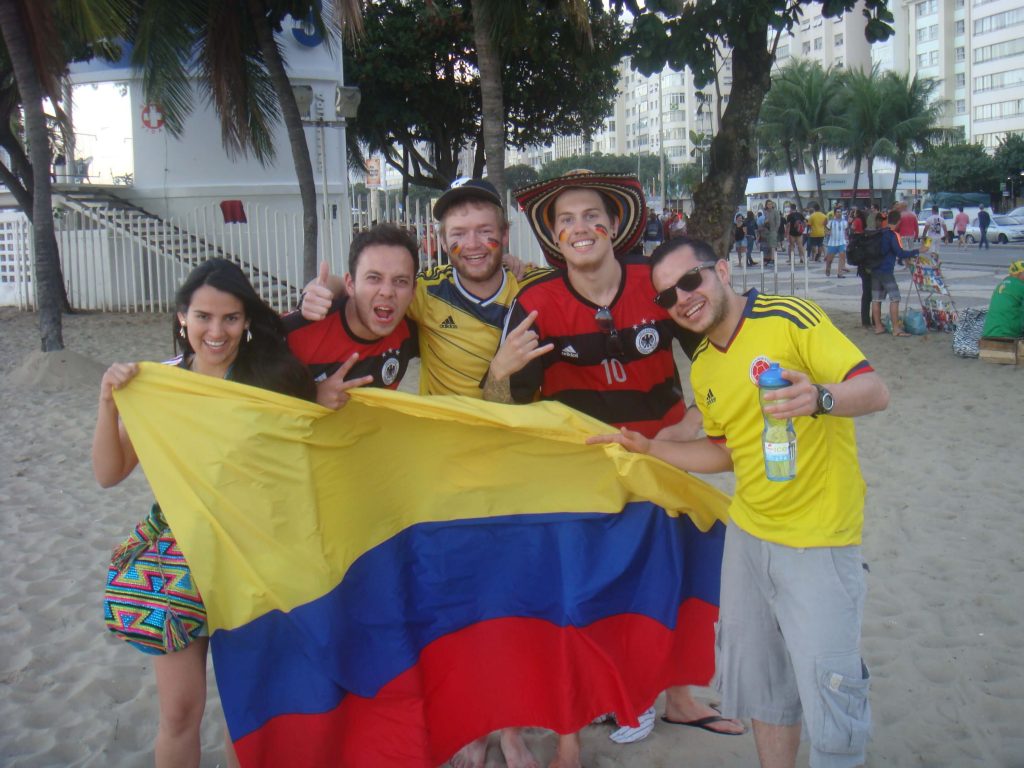 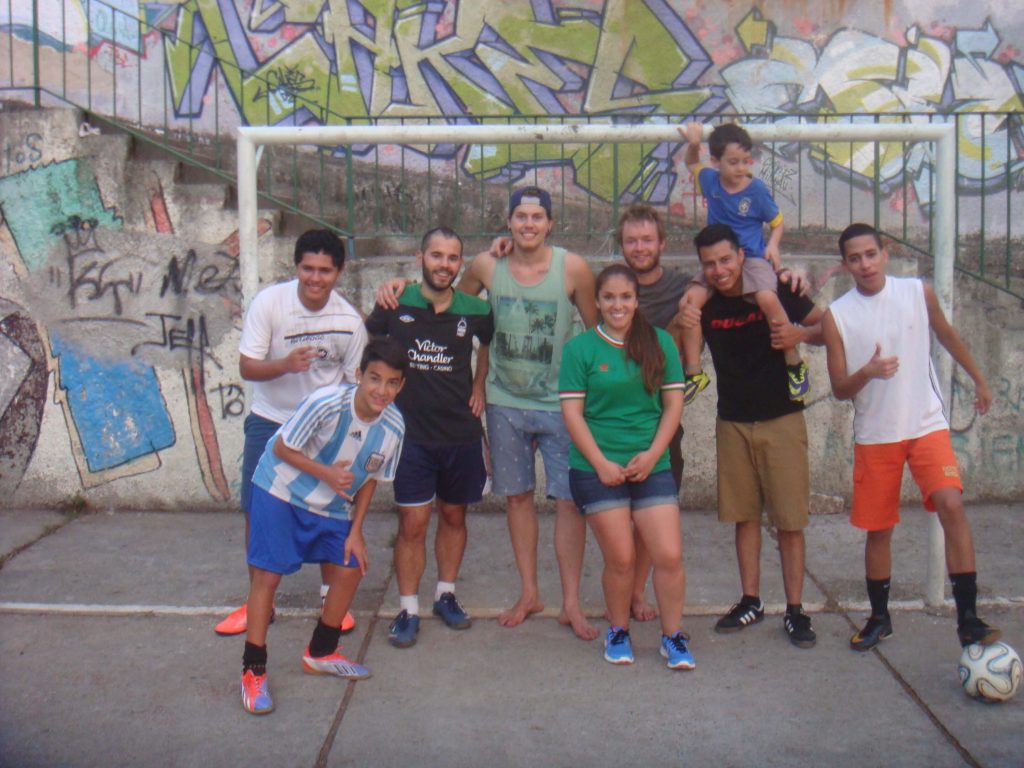 One of the best football matches of the whole trip 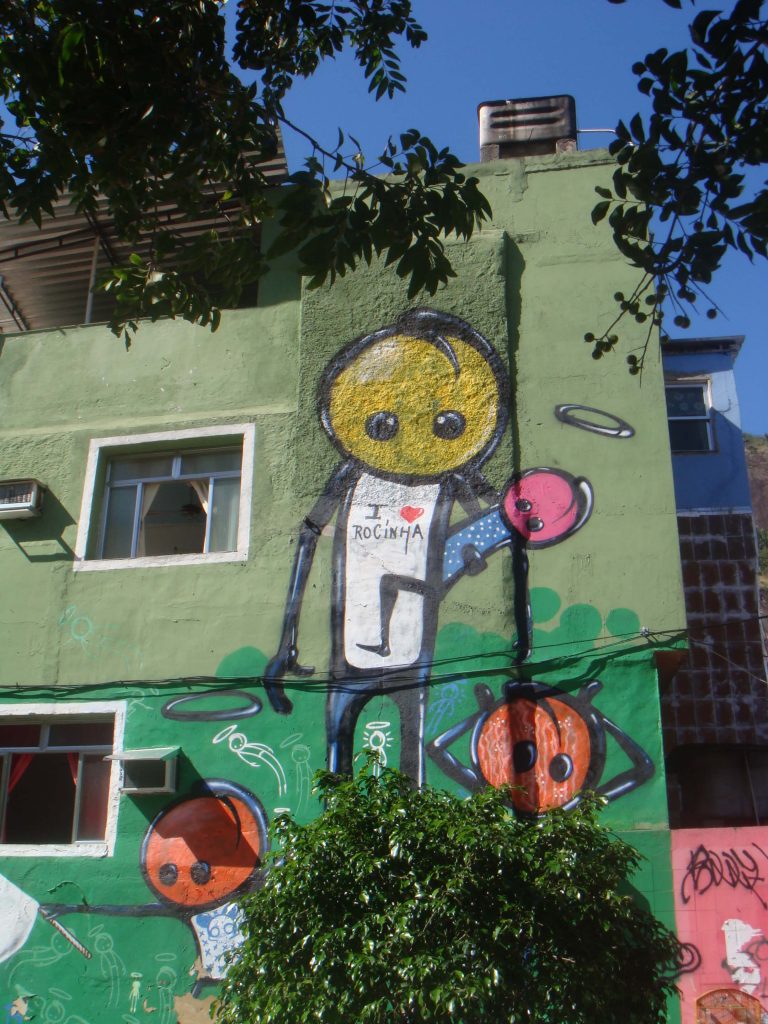 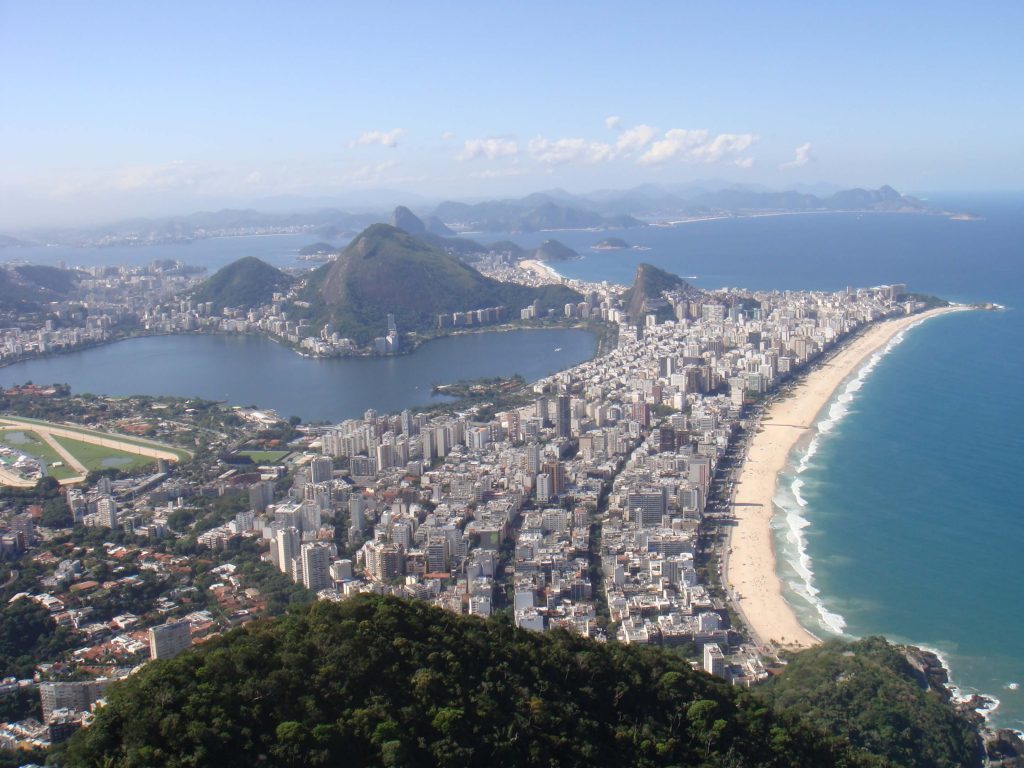 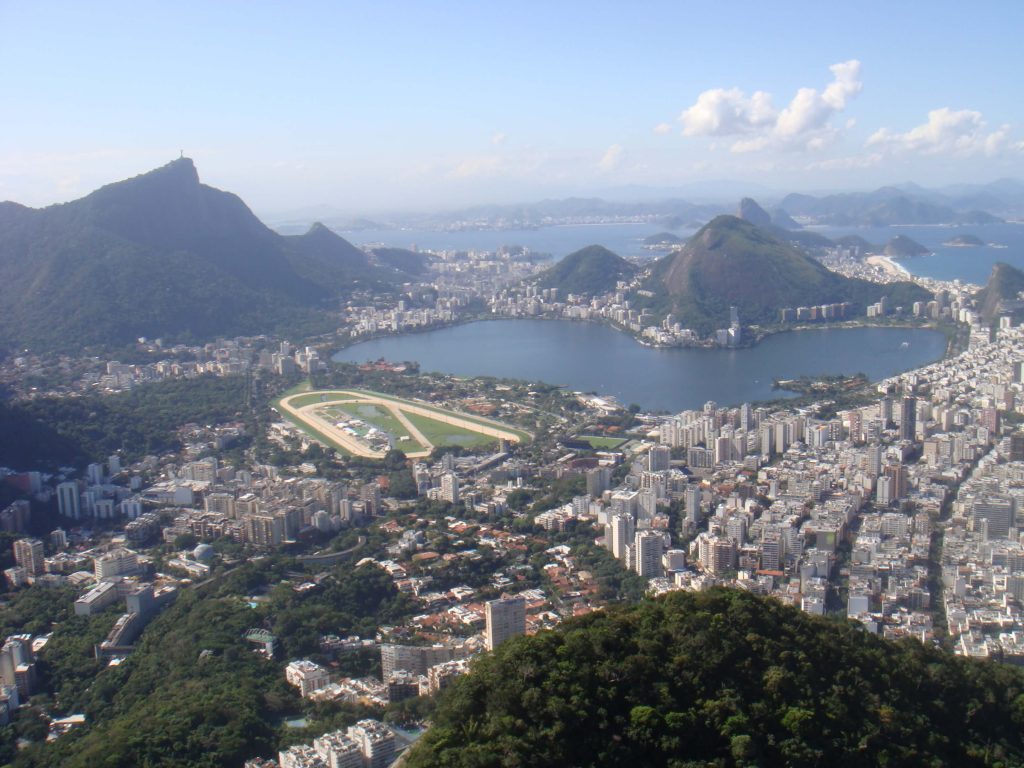 View over Rio from Two Brothers

Walking in a neighbouring Favela with Obi and Cal 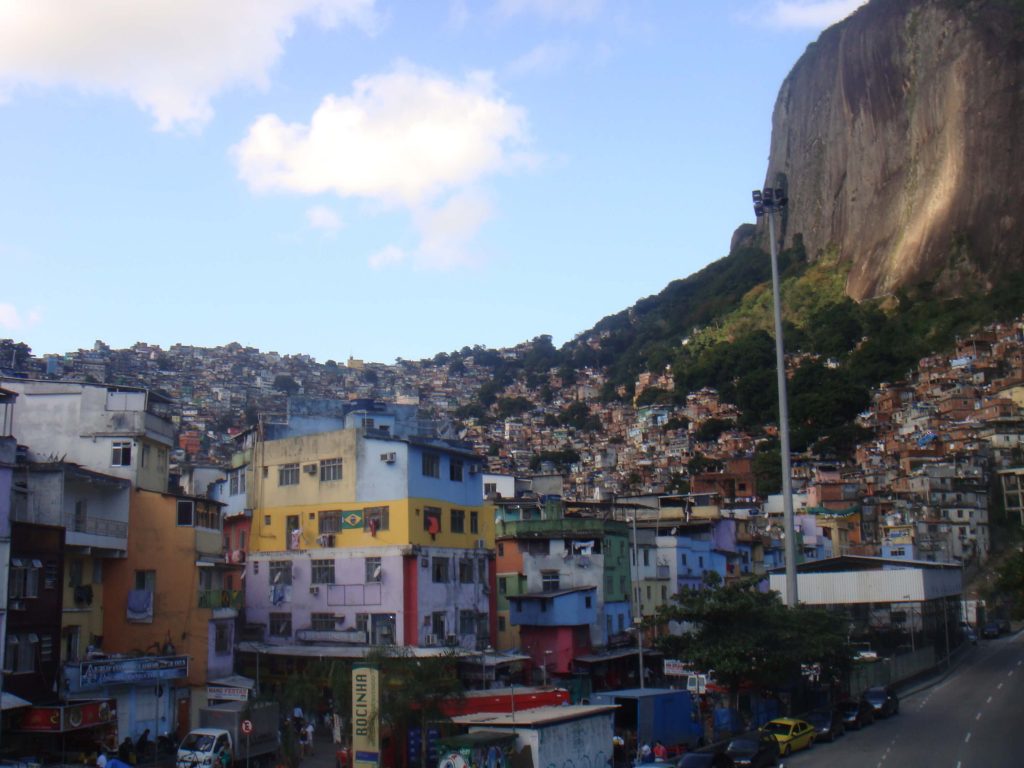 Bottom of Rocinha, a lively and bustling place

View along one of Rio’s beaches (Ipanema I think)