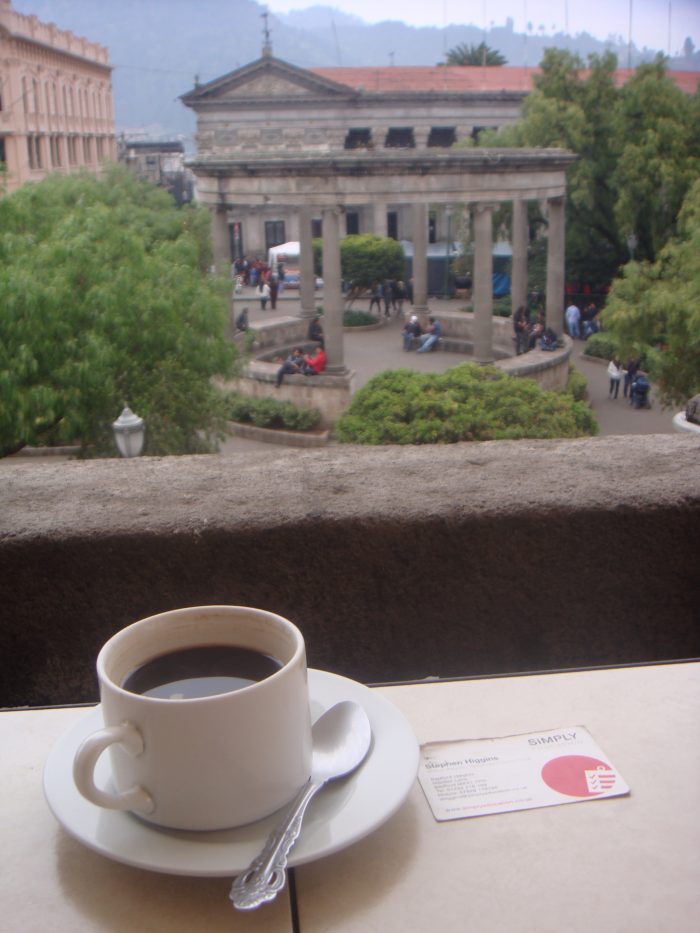 We arrived in Xela around 10 minutes ago, and made our way to where you catch the collectivo taxis to the city centre. Three of us , all with big backpacks, trying to cram in to already overloaded transport.

As we wait, we become aware of something going on about 20 metres away, as one Guatemalan picks up a rock and starts walking towards another, who is twice his size.

The smaller one, who we will nickname ‘Tim’, misses with his first rock throw, as the larger one grabs him, throwing him to the floor before walking away.

Tim hasn’t had enough though, and although clearly overpowered he jumps up again and starts foraging around for another rock, while a friend of his tries to hold him back. He breaks free and picks up another rock, about half the size of his hand.

At this point the big one is watching from a distance as Tim runs over with the rock in his hand, they dance in a circle, arms flailing, the big one trying to protect his face from the inevitable rock throw. Tim throws and narrowly misses, as the big one produces a piece of agility that Jussi Jaaskelainen in his prime would have been proud of.

This time though, Tim doesn’t escape the big ones clutches, as he throws Tim to the ground for a second time, on this occasion sitting on top of him, grabbing both of his arms in a paralysing move. I look around and dozens of people look on, expressionless, in neither shock or surprise.

It looks like Tim has chanced his luck too far, and as we expect to see him get a hiding, the big one gets off of him and lets him go free. To our bemusement Tim is still not admitting defeat, and for the third time he gets up and goes looking for another rock to throw. This time, however, his friend does a better job of restraining him, as the big one slowly walks away and around the corner, turning back now and again to see Tim shouting a flurry of abuse. Welcome to Xela!

In fairness to Xela, it is a charming little city, soaked in the old Spanish colonial style which gives it a welcoming and friendly ambience – just as long as you don’t stray too far from the centre.

For the past week I have been studying Spanish in the Utalan Spanish School, which I’d definitely recommend. If I was to plan my trip again, I’d definitely start it with one of these courses, for as much time as I could spare.

If there was one piece of advice or regret I have heard from most travellers in Latin America, is that they wish they had studied more Spanish before they came.

A week was certainly very helpful to my ailing skills, and would have been a great starting point, and a gradual way to ease yourself in to Latin America, and also meet fellow travellers.

There is also the option of doing a homestay, which I opted for, and again would highly recommend. The school also arranges activities in the afternoon once the classes have finished. One of the highlights for me was getting a few of us together to and play some football.

As we arrived at the football pitch, there were already some locals just finishing up and who looked a decent bunch of players. As we only had 6 or 7 of us, we asked if they fancied a game, to which they challenged us to a match.

After catching the earlier glimpse, I was assuming we’d be given a good hiding, but to my surprise we ended up beating them fairly convincingly. It was all pretty jovial, apart from one guy who was getting increasingly aggrieved as each goal went in. A few tackles flew around at the end, but generally it was played in good spirits.

It was only after we finished they told us they were starting work in an hour. After asking where they worked, it turns out we had just played the Guatemalan Police! Perhaps we might not have gone in to the tackles so hard if we had known that earlier…

If I was going to describe Guatemala in one word, I’d go for ‘raw’. Raw beauty is everywhere, from lakes to volcanos, to Mayan ruins. Parts of the culture I also found quite raw. Sadly the fight described earlier was not the only violence we saw, and after attending a football game, it seems that the rowdiness is perhaps part of it.

More of a firework display and sing-a-long, I’ve never been to a match and seen less of the actual football than here. I did, however, manage to glimpse my first goals of Latin America at my 3rd attempt, through a wall of smoke, exploding fireworks and the whole crowd bouncing around. It sounded like a good game at least. 3-1 to Xela I think.

There was also a number of political protests going on in the city, which seem to be fairly common occurence. By the end of the week we had become accustomed to frequent loud bangs without explaination, fireworks and lots of people wearing masks over their face.

A bit daunting to begin with, but always interesting to watch – we climbed up a tree for one particular protest to get a better view.
I didn’t necessarily feel unsafe in Xela as such, but was continually reminded by my Spanish tutor and home stay family not to carry any money or expensive items, be particularly careful at night, and to watch out for the ‘dangerous banditos’, who apparantly roam around.

One of the more disturbing things was coming across people lying in the street. Sometimes they looked like they were homeless, and were just asleep, although other times it looked like they had been on the losing end of a beating, or perhaps even worse.

There was one big debate that happened in the school one afternoon, after some of the other students had seen someone lying in the street not moving, had been there for several hours, and looked badly beaten.

Many of them, though I didn’t see him myself, walked straight past, unsure what to do but obviously concerned about the man. Many of them with only limited Spanish, and no understanding of what they should do in this situation.

There is a fairly heavy police presence in the city – often cruising around in their 4×4’s, crammed in to the back with their rifles on show. You would think that they would aid the man, or at least call an ambulance – especially as it was in such a central area. No one knew if he was even alive.

I was fortunate, in an ignorant way, that I didn’t see this particular man and have to make that choice. It had shook up a lot of the students, should they have done something?

Most of us didn’t have working phones, who would we call? The ambulance? My spanish wouldn’t be extensive enough to explain anything. Why were no other Guatemalans helping him? It was quite a poignant moment. We informed the Spanish school, and hoped that they might know what to do, but they didn’t seem alarmed, and didn’t seem to think we should do anything further. Perhaps this sort of thing was normal here.

I was contemplating this the next day, what would I do if I saw the same thing, and as I rounded the corner for the Spanish school there was another man laying motionless in a busy central street, people stepping over him or crossing the road. As I got nearer, he looked to just be asleep – perhaps after drinking or drugs – I looked to see if he appeared to be in any pain, but it looked like he had just passed out.

I crossed the road and carried on to the Spanish school. Should I have checked to see if he was okay. Could he be carrying a knife or a gun? Gun ownership levels are very high in Guatemala. This would be a different if I was in England, but there are many stories of getting involved in situations in different cultures that you know very little about. I took the easy way out, as I watched people walking over him like he didn’t exist.

The week flew by, and I was sad to be making plans to leave. I had enjoyed my home stay experience, and it was nice to have healthy food, some routine and my own room. There was a lot that I didn’t get to see in this part of Guatemala, and that familiar feeling of not having enough time, and wanting to stay longer crossed my mind yet again, as I began to embark on a long and assumedly arduous journey to the north of Guatemala. 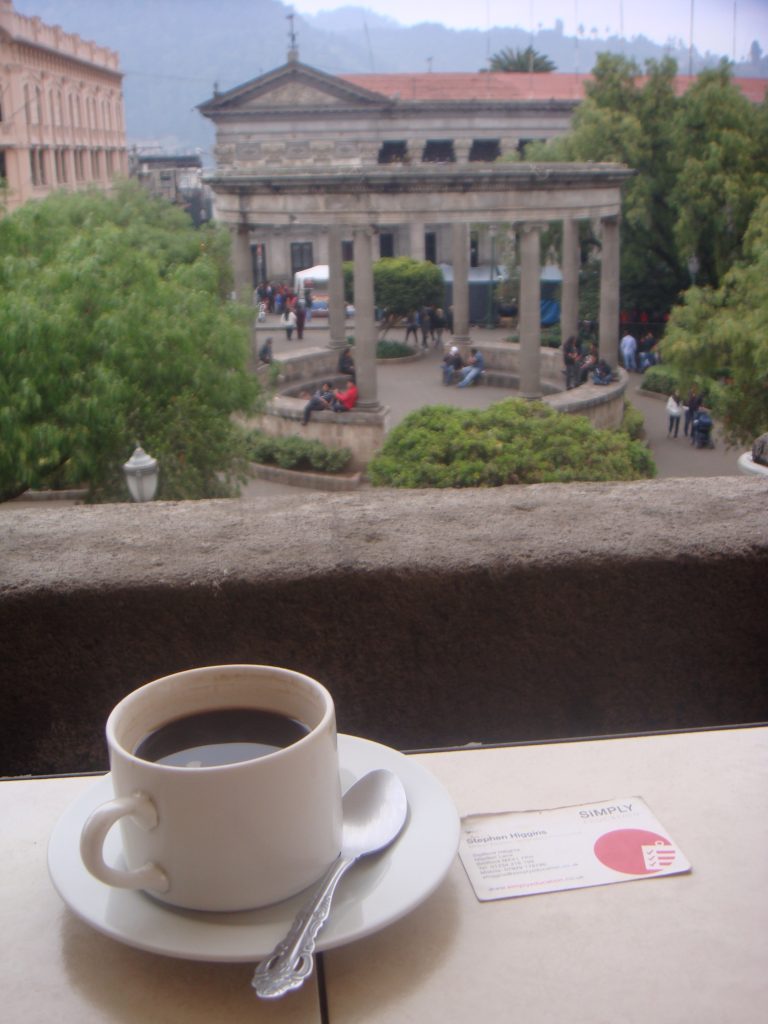 Coffee with a view of the main square 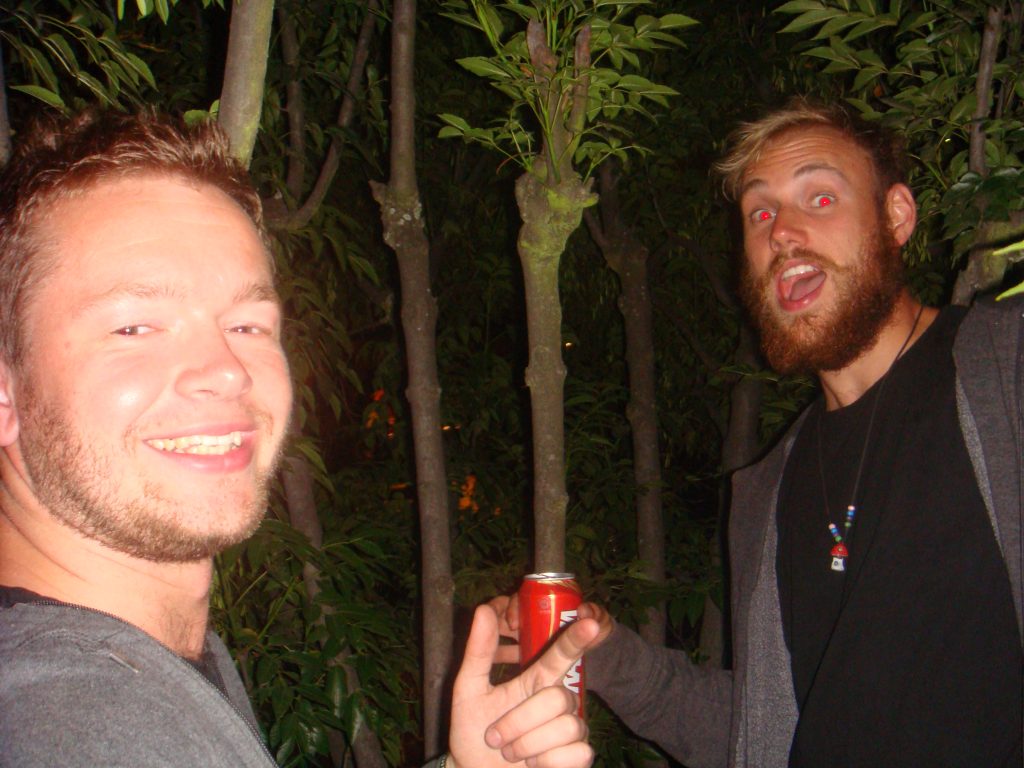 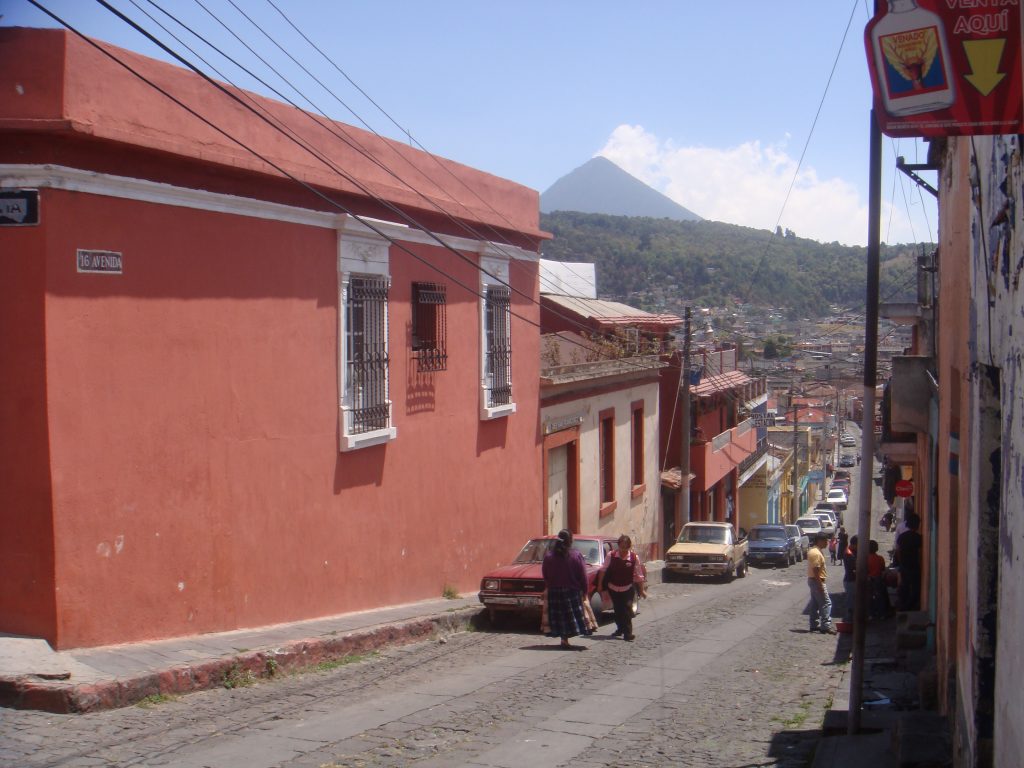 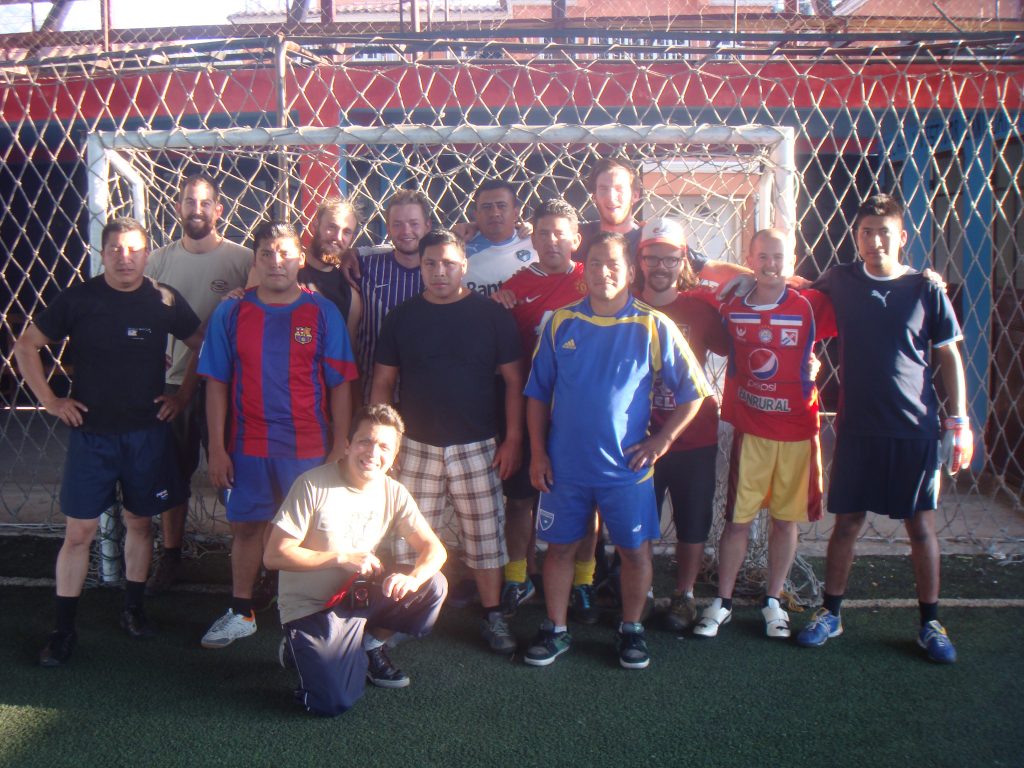 A photo after the match vs the Guatemalan police force

A rare glimpse of the pitch 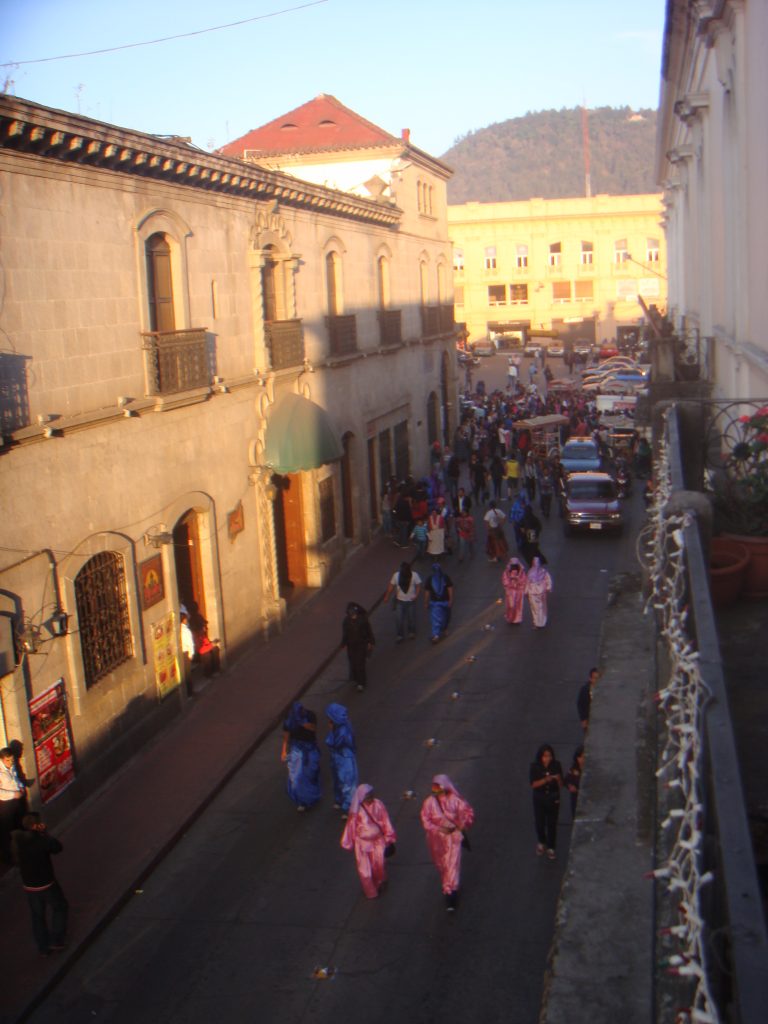 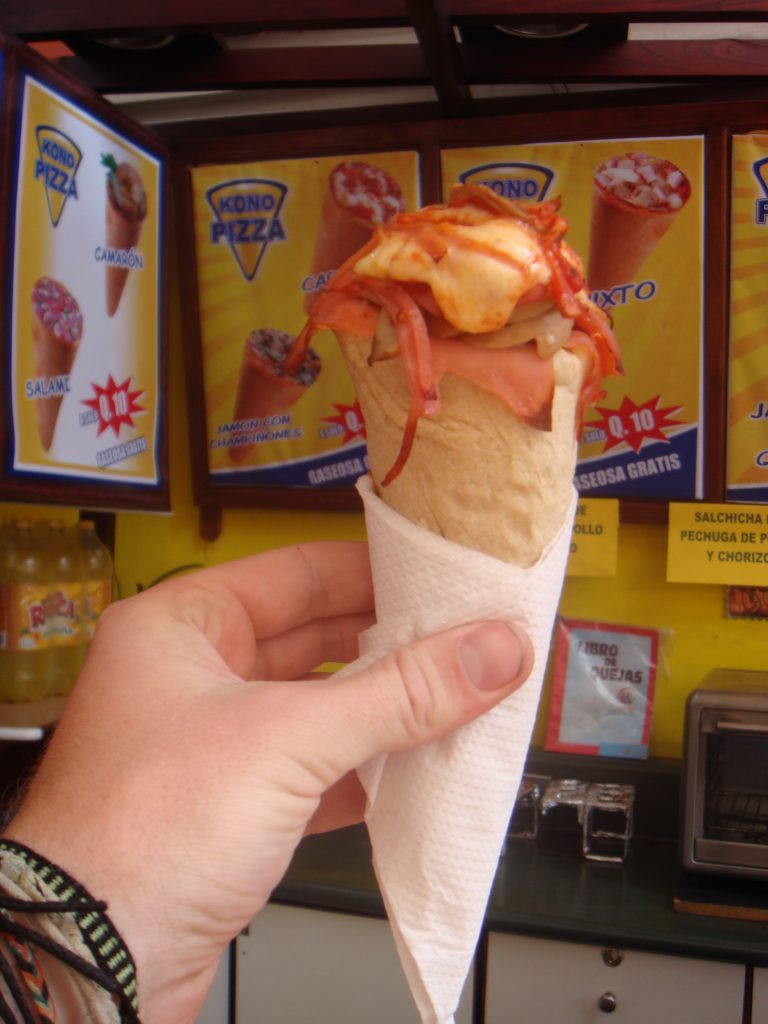